To light the fire or kick the butt 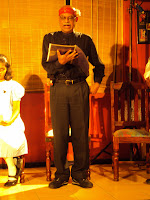 The eve of World No Tobacco Day (Sunday, May 30) turned out to be a fun-filled laugh riot at Casa del Sol. Smoke Signals (frequently mistaken for a play when in fact, it is a heady mixture of quotes, short stories, speeches, limericks, jokes, songs and anecdotes that are destined to burn a hole in your stomach faster than any cigarette) was performed to an enthusiastic crowd by the Madras Players who walked in looking like Cherokee Indians from the plains of Native America. 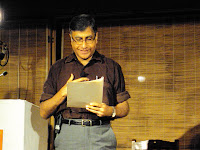 The opening note from the bull horn played by Bangalore’s Alan Rego set the tone for the rest of the evening which started with the song of Hiawatha. Without any vestiges of preaching, Smoke Signals takes the audience through a mad trip, replete with the conversation between Alice and the caterpillar that smokes a hookah (Alice in Wonderland) and a chewing gum that comes alive and chews a little boy (a short story by John Steinbeck). Mithran Devanesen, whom Bangaloreans will remember for his Mamma Mia! and Midnight Hotel, and his young protege, Sharanya Nair, brought alive the crazy wonderland of Lewis Carroll, while the stalwart, PC Ramakrishna, gripped everyone’s attention with his baritone rendition of King James’s speech and Steinbeck’s story.

Alan Rego, sporting a mohawk and holding a peace pipe, sang Smoke gets in your eyes and Smoke that cigarette, both of which set the audience tapping their feet. His joie de vivre was instantly contagious and soon, Sharanya Nair stunned the crowd with her soulful rendition of It’s a wonderful world, accompanied by Alan.

With another great event decorating our cap, thanks to Casa del Sol and the ACTS group, Under the Raintree is growing every day, with more artists showing interest in these creative ventures. We are only too thrilled to have had the opportunity of presenting such great talent to you all. Until next time, as the Siwash Indians used to say, peace be with you. 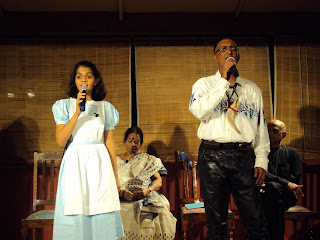