This Little Cloud has a story to tell

Bangalore’s popular theatre Ranga Shankara’s innovative storytelling session is a welcome escape for TV-addicted children and their parents
Padmavati Rao or ‘Pinty Akka’ is the quintessential storyteller with long gypsy skirts, flowing tunics, silver bangles and a brilliant smile. She has previously conducted storytelling events for parents and children. Her ideal environment is one with minimal audio-visual noise. 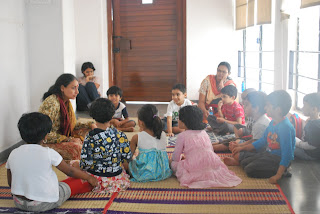 As Rao makes the room come alive with the sounds of the animals in her tales, “ooh”s and “aah”s escape the children’s lips. The walls seem to burst with brilliant colours painted by the imagination of the children, as the words conjure up images with the strokes of her emphatic fingertips. With the sunlight pouring in from the large windows, the children are free to curl up or sprawl out as they please.
Rao treated curious youngsters with her animated storytelling at Ranga Shankara’s ‘Little Cloud’. It is the newest offering from the AHA!, a programme of Ranga Shankara which aims to bring theatre in all of its forms to the younger generation. The storytelling session was conducted over two weekends and elicited an enthusiastic response from parents and children alike. A series of four sessions with Rao and Abhishek Majumdar for children aged 4 to 9, it was a relief to parents looking for a weekend educational activity for their kids. 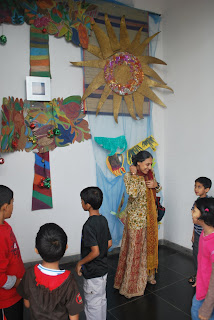 “We subtly teach children what is generally not learnt in a school setting,” says Rao. She believes in giving her audience creative space and indulges the kids in a clay-molding activity. “Unlike most storytellers, I’m not hooked into having my audience’s eyes locked with mine.”
Folk tales or family lores, stories have always intrigued children of generations past, whether narrated by their grandmothers, parents or by the vagrant passing their town. History was narrated so colourfully through these tales giving them an awareness of their present. Until a few decades ago, children were accustomed to curling up in their parents’ lap and listening to stories. Stories not only had the power to broaden a child’s imagination but to inspire and heal them.
With the onset of the digital age, children are glued to the TV, and a dry narration of a story does not interest them. It is now becoming difficult to narrate stories without being sceptical of their child’s response. Rao herself was once confused when a parent asked, “How does one narrate a story?” She replied very simply that she had grown up listening to stories from her father and that he had passed it on to her.
In her sessions, Rao takes the stories she’s been brought up with and recreates them, retaining the essence. Sustaining a child’s interest is difficult, she agrees, but voice and the rhythm of the story can engage the attention of any child. Her folk tales are not merely moral stories, but tales from around India. She wants to highlight the pleasure of being, while maintaining the distinctiveness of who we are and where we come from.

“I was used to waking up in the morning and seeing rangolis being drawn on our porch – where is our culture reflected in the homes we live in now?” she questions.

For Rao, it is important to uphold the storytelling heritage. “Stories are like dreams; they help us retain the belief that even dreams are possible.”