Heading back to Bangalore from a weekend break, we were whizzing down the Mysore- Ooty highway, when five km before Gundlupet our eyes were caught by a simple rectangular building with an unusual name – Dreamcatcher. The name had us doing a u-turn and going back to discover the café of my dreams.
A couple of us had ideated about a travel café last year; as some projects do, it did not complete the last mile. The discovery of this travel café thus was all the sweeter, and back in Bangalore, I found out more. 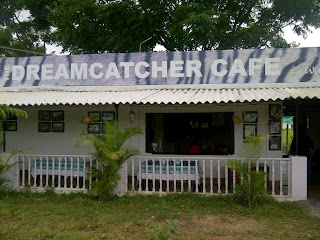 The legend of the Dreamcatcher belongs to the Native American tribe of the Ojibwa (Chippewa) and takes its name from a spider. The dreamcatcher is a handmade artifact, much like a chime, and it is supposed to ensnare dreams. It is typically hung over the bed and is supposed to let good dreams pass through to the sleeper while bad dreams lose their way in its web and die under the sun’s rays at daybreak.

Such a simple, beautiful belief, as much of native wisdom is and very comforting. Many other Native American Indian tribes have adapted the dreamcatcher and one of them gifted a dreamcatcher to Tito Chandy in Alaska after a stint of fishing. An out and out adventurer, in the nicest sense of the word, Tito set up a special interest travel company and called it Dreamcatcher.
NH 212 is a road that he uses very often and he was bugged with the dearth of pit stops where one could get both tasty food and a clean toilet. The owner of a roadside eatery was willing to lease the place to him and then began the great café build-off by a team of enthusiasts who camped there while renovating it, learning the abc’s masonry, woodwork and flooring. The process started in October last year and by early December it was ready for people heading off for the Christmas and New Year vacations.
The café has become a favourite with bikers, families and business folk. Dreamcatchers and wind chimes dance around in the afternoon breeze; tables and chairs are of simple, comfortable and colourful cane and wood; a bookshelf has easy reads – comics, magazines and books. There is a large vegetable garden at the rear and interesting photos on the walls. The food is filling and tasty: burgers, sandwiches, pasta, waffles, shakes, coffee and tea. There are maps and helpful instructions on travel, and soon there will be a store selling essentials that travellers might have forgotten –including the all important fishing rod and condoms, Tito tells me, straight faced.
Dreams do come true sometimes, even by unusual transference and Tito’s Dreamcatcher café is the manifestation of many a traveller’s dream.
-Sandhya Mendonca(Sandhya Mendonca writes a weekly column ‘My Bangalore’ for Ohearldo)
Share :
Lighting up India
A Perfect Takeoff