The Art of Appreciation

Designed to make art more accessible to the public, the art walks at the National Gallery of Modern Art (NGMA) help you understand and appreciate its staggering collection of paintings, sculptures, graphic prints and photographs.

Art could not have found a better home than the stunning Manikyavelu Mansion. Over 90 years old, the mansion was once owned by the Mysore Royal family. Equally regal and impervious to the changing cityscape outside are its trees – jamun, pipal, gul mohar and many other species that capture the imagination, so much so that the museum’s walks included the Arboretum Walk earlier this year.

On a late Wednesday afternoon, the colours around the museum are sharper, as the sun whisks off the last traces of rain. A small group gathers around Tejshvi Jain, Assistant Curator, as she begins the Language of Visual Arts walk. A 45-minute walk, it takes visitors through the basic aspects of art and how to approach it.

“Enter a work of art visually and then go deeper,” suggested Jain handing out slips of paper. For most, it was the first introduction to the elements and principles of art.

The National Gallery of Modern Art which opened its doors to art lovers in 2009 has constantly brought out initiatives that have made it one of the must-visit places in Bangalore. Apart from the museum’s permanent collection, Signposts of the Times, there are travelling exhibitions that include gallery walks by assistant curators. The Signposts of the Times collection showcases Indian artwork from 1857 to the present day and its portfolio includes Abanindranath Tagore, Amrita Sher-Gil, Rabindranath Tagore, Yusuf Arrakal, Raja Ravi Varma and MF Husain.

As Jain took the group through the basics she pointed out the relevant paintings, giving space for discussions and concluded the walk by encouraging the group to split into smaller groups and assess any piece of art. Most works were untitled allowing the viewer to draw their own meanings from the paintings without being influenced. One of the visitors, Vivek said that the interpretation of art was to him both physical and experiential.

For Keerthana, this was a second visit. She says, “I know zilch about art and this walk was a good introduction on how to read a painting. It helped us see our perception is as important and not restricted by the artist’s interpretation.”

Science research students Seung and Prakash seconded this. They had attended the Introduction to Modern Indian Art, a 75-minute walk on Saturday mornings. “The walk was great. It showed us how to look at art…the technical aspects. I have seen other explanations at other museums but this was the first one where we were actually asked to interpret art,” says Seung.

NGMA offers more to art enthusiasts with special walks like Experiencing the Landscape and Sculpture in Indian Art. Its auditorium hosts talks on art, film screenings, as well as dance, music and theatre performances. Secluded benches by the mirror pool are perfect to slip away and ruminate. Its two-year-old free reference library with a growing collection has also seen a steady stream of art students and professionals. 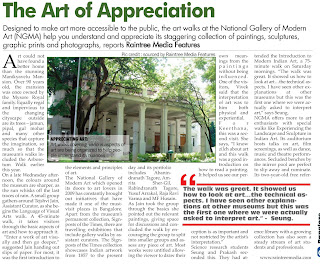