“Allen lived an extremely eventful life, travelling, writing, puncturing modern myths with his incisive commentary, loving, and having a blast. He reveals several facets of himself in this book and it can be a surprise to the ones who think they know him. There is the secular Allen, at ease with all the religions and customs. Allen was equally adept at dissecting the Upanishads as he was with explaining the nuances in the Bible. The book is a testament to his secular views, with several references to both the good and ugly face of religion. 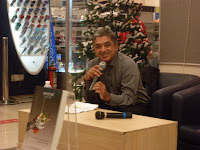 Allen’s sense of branding is amazing. With his Karl Lagerfeld sunglasses, Dom Perignon champagne, Rolex watches and Tourmaline Green Toyota Land Cruisers, he has built a rich world full of very precise and specific references to the ambience.

History, seen through Allen’s words, takes on a new dimension. The story of the founders of the newspaper is surely one of the better structured pieces in contemporary fiction. This is not merely one man’s history, but the history of the world that seamlessly blends with the main storyline. Every segment of narration in this book is a little battle, a small but important part of the bigger war. 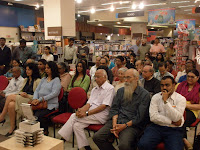 Allen deals with death in several ways in his book. There is the sad death, drawn out and painful. There is the sudden death, with no more than one line to describe it. And then there is the gruesome death, the flesh and blood creeping on to the pages of the book with disturbing clarity.

The book is populated with several women, lusty, passionate, emotional, strong, weak – and the world of media has always been fuelled by adrenaline and libido. But the search for true love forms the core of the book, and elevates it from mere fiction to a work of heart and soul.” 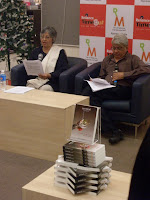 Reliance Time Out was the perfect place to sit down and talk about a good book. On the 17th of December, with the sounds of the city muted to a distant buzz, surrounded by thousands of books at the Reliance TimeOut building, Allen Mendonca’s Sentinel House was given another red carpet welcome by the book lovers of Bangalore.

Journalists, editors, aspiring writers and ardent fans got a sneak peek into Allen’s novel as the doyens of theatre, Jagdish and Arundhati Raja, read out three passages from the book, bringing to life the ruthless media baron and the other colourful characters that populate Sentinel House. One could picture the fictitious media scion’s swanky penthouse as the duo unleashed the rage and the passion. 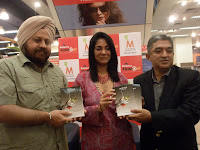 The copies of Sentinel House were once again flying out of the counter. The head of Reliance TimeOut, Mr. Deepinder Kapany, was also seen holding a signed copy up to the camera delightedly. With such a warm reception, Sentinel House is sure to find many more ardent fans.