BLOT – an acronym for Basic Love of Things – is an audiovisual collective that mixes music, art, design and video on one platform. They blend sound and music, while manipulating their performance techniques as well as stop-motion animation and motion graphics.

BLOT consists of Avinash Kumar, a designer, VJ, visual artist and the man behind The Grey Garden (a restaurant in New Delhi), and Gaurav Malaker, a DJ and producer. The duo’s diversity is as apparent in their music as it is in their visuals. Their gigs are wild, energetic, funky and fresh. It consists of fantastic electro music and some brilliant visual treats.

BLOT also creates installations, videos, digital arts and more. They love to get messy with sounds, instruments, genres, art, photography, videos, light, projections and anything else they can play with.

As India’s original and leading audiovisual collective, BLOT curated the experimental stage at Sunburn Festival in Goa (2010 & 2011) and further afield have performed at legendary venues like Bar 25 and Tresor several times as well as at the India Music Week (2011), Geneva’s Electron Festival (2011) , Berlin Music Week (2010) and UNBox Festival.

I caught up with them at their recent gig in Bangalore and their set was a little more theatrical and accessible while still keeping it club friendly. Here’s an exclusive interview with BLOT.

How does it feel being India’s original and leading AV collective?
It is not a very big scene, so I don’t know if we feel that distinction – we’ve never thought about it and I wouldn’t recommend that anyone else think about it either!

What encourages the two of you to constantly try something new and different?
We’ve got short attention spans and are our own worst critics, so we’re constantly trying something new just because by the time we’re done with anything, we’re sick of it already.

What inspires the two of you, in your music and visuals?
The world around us.

What is your take on the Indian EDM scene and more foreign artists coming in and discovering India?
It’s a really good time to be looking towards the Indian scene. For a start people are looking for sounds they like, and that means that they follow artists, and look for gigs that suit their sound. That’s quite an evolution. This scene might be in its nascent stages, but it’s setting the blueprint for shifts in the scene.

What has been the best gig so far for BLOT?
We played at this huge underground party called Champagnarama in Berlin in 2010 – it’s been one of the best experiences of my life, and it changed the way I perceive electronic music. Besides this one, our gigs at smaller venues tend to be the ones that stand out for us. It’s the nature of them, because they’re intimate, and allow us to have a direct connect with the attendees that make them memorable for us.

To find out more about BLOT, listen to their tunes and check out their visuals, find them via their Facebook page or SoundCloud. 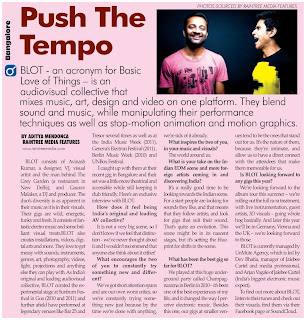