Of blossoms and bungalows

There is a city beneath the city and Poornima Dasharathi, heritage specialist, lifts the veil off the new to reveal the old as she takes you on a leisurely stroll down one of Bangalore’s oldest neighbourhoods, Malleswaram.

Sitting on the granite steps leading up to the Kaadu Malleswara temple under the canopy of a pipal, with birds chirping a mile a minute, it is easy to slip away into the 17th century when this was a hill peppered with boulders with a tiny temple perched on its top, visited by people from a nearby village, Madigenahalli.

Two centuries later, Bangalore claimed it and Malleswaram aka North Extension was born in 1895 under the rule of the Wodeyars. Our guide Poornima Dasharathi points out that we were at that moment in the oldest part of Malleswaram.

One of the temple’s earliest patrons was the Maratha king, Shivaji’s half-brother, Ekoji in 1669. Many patrons and donations later, the temple is a far cry from what it once was and has added colourful gopurams and easy to clean floor tiles. The sanctum sanctorum is all that remains untouched and has been retained exactly as it was originally built.

Stepping outside, it is hard to reconcile with the busyness of everyday life, the crowds and traffic. Traffic includes largely indifferent donkeys from the nearby dhobi ghat. Dasharathi leads us to the popular Veena Stores on Margosa Road for a quick cuppa which can still give the new coffee chains a run for their money.

An IT engineer for eleven years, Dasharathi got the opportunity to travel around the world. The heritage walks in London and Melbourne left her impressed. After a stint with INTACH, she started Unhurried in January 2012 and has since then organised walks and tours to niche places as she believes there is more to Karnataka and Tamil Nadu than just Hampi and Mysore. A storehouse of information on history, architecture, customs and anecdotes, Dasharathi’s storytelling skills come into play during the walk.

The area’s earliest residents were the Telugu-speaking workers at IISc, the Saraswat Brahmins employed at Raja and Minerva mills, and high ranking government officials who were mostly Iyengars. Dasharathi led us past a row of new bungalows which now belong to the descendants of one of Malleswaram’s first residents, HV Nanjundaiah, the first Vice-Chancellor of Mysore University.

A few doors down is scientist CV Raman’s bungalow that has been maintained by the Raman Trust and hence, untouched by developers. Dasharathi says that like most of the spacious bungalows, even this was influenced by the Europeans. There are jackfruits and hibiscuses and cotton trees, some we are told were planted by Raman himself. His wife who played the veena (Carnatic stringed instrument) frequented the Sevasadan Association, which is but one of the many cultural associations one can find here.

The walk was wrapped up at the Central Tiffin Room, now known as Shri Sagar, on 7th cross. Digging into some delicious benne dosa (butter dosa) with her family was musician and actor, Vasundhara Das, who is just one of the area’s celeb residents. Others include badminton player Prakash Padukone and his daughter, the Bollywood actor Deepika Padukone when she is in town.

Dasharathi feels that people are growing more aware of the local history and have begun to appreciate heritage better when seen from a different angle that includes history, architecture, customs and occupations, which is unlike the generic descriptions usually given by tourist guides.

Other walks around Bangalore at Unhurried include the Pettah Walk and Cantonment Walk. They also organise tours to explore the eco trail in Banawasi, the culture-rich South Canara and Kodigeri near Ooty where John Sullivan first discovered the verdant Nilgiris. You can contact Dasharathi through the website www.unhurried.in.


Read the story on the Goa Herald: 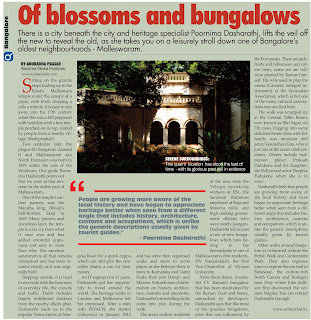 Share :
Bangalore’s got a hole in the wall
The Art of Appreciation