Marvels of Mysore and more

Marvels of Mysore & more, a unique contemporary book on Mysore, was released by Tourism Minister Anand Singh here today. The book that was released in time for the famed Dasara festival is published by Raintree Media and supported by the Department of Tourism, Government of Karnataka. 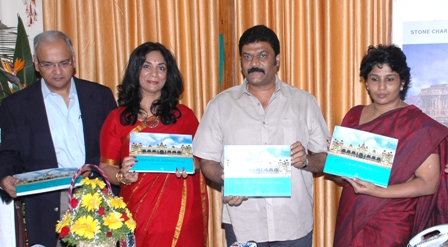 Releasing the book, Mr.Singh said, “Mysore is one of the most attractive tourist destinations in India. The city has preserved its rich cultural heritage over the years and continues to enrich the lives of Kannadigas. A contemporary book like this serves an important purpose of giving accurate information with good photographs for the benefit of readers here and from all over the world. This book is an international edition and we are sure it will be much appreciated.”

Written by Sandhya Mendonca and Anita Rao Kashi, with principal photography by Asha Thadani, Marvels of Mysore & more is a factual photobook on contemporary Mysore. The book celebrates the captivating sights and enduring charm of this heritage city.

Sandhya Mendonca, MD & Editor-in Chief, Raintree Media who has published the book said, “Marvels of Mysore & more is a contemporary book on Mysore. There are several books on this historic city that talk only about its heritage or are just guides. As the title suggests, the publication has more to offer: this book is an all-in-one: a photobook, a travel guide and a memoir of the historic city and the region around it.

Mysore and the region around it offer endless delights for locals and visitors alike and this book has descriptive information about the cultural history and the wonders of nature in the area. The contents of the book include the festival of Dasara, the colourful folk dances, the heritage buildings, the modern developments and the vast cultural diversity in this part of Karnataka. Marvels of Mysore & more shows the reader what to see, what to do, where to stay, what to buy in this city, and in the interesting tourist trail starting from Bangalore through Melkote, Ranganathittu and other places all the way to Kodagu.”

Praise for Marvels of Mysore & more

“Combination of a coffee table book with marvellous pictures and an efficient guide for tourists to Mysore and its environs.” – Shashi Deshpande, Author

“Mysore’s splendorous syncretism tingles each of our senses. Its sights, the palaces, hills, lakes, gardens, sanctuaries, are a balm for sore eyes. From the thunder of temple bells to the soft strains of Carnatic singers, its sounds take us back in space and time. It smells of the ancient and the modern through flowers and coffee, sandalwood and incense sticks. From the Mysore Pak to the Masala Dosa (and everything else in between), its taste has conquered tongues. And, as a walker’s paradise, it welcomes you to touch and feel its royal and colonial past. Sandhya Mendonca and Anita Rao Kashi open the window to see and sample the myriad marvels of India’s most beautiful city.” Krishna Prasad, Editor-in-Chief, Outlook

Share :
All the Best
Best Of India Press Release