Learning on a Full Stomach

Looking for the local municipal ward office to pay our property tax, I heard voices piping up, “Miss, what do you want?” I looked around to see cheery little lads, obviously from the government school in front me; I mentioned my quest, and they helpfully pointed out the little office, tucked away behind their school. It was then that I noticed that they had put down huge steel containers that were carrying from a blue van. It was their mid-day meal supplied free of charge by the Akshaya Patra Foundation and I just have not been able to get over their happy, smiling faces. 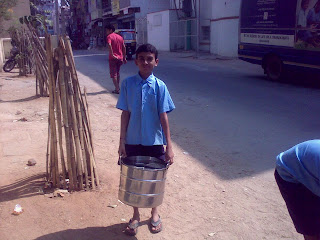 Just over three years ago, we had profiled the organisation in the Best of Bangalore, and in the interim, its central kitchens have increased from 10 to 18 feeding 1.2 million children in over 8000 schools in eight states. Nutritious food is hygienically cooked to suit the palate in different regions and trucked without fail to reach the schools at mid-day. 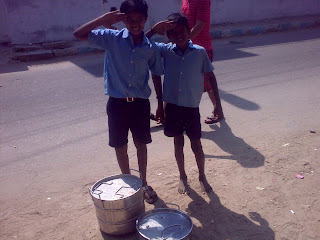 The Foundation is a secular not-for-profit entity of the ISKCON (International Society for Krishna Consciousness); it launched the midday meal programme as a voluntary effort in 2000 in five schools in Bangalore; by the next year, the Supreme Court mandated that all government schools had to provide mid-day meals and called in the Foundation to provide testimonials.

Private donors had by then begun supporting this noble mission and the Ministry of Human Resources followed suit. The results are very evident in the increase in school enrolment and fall in the number of school drop-outs. The meal is the incentive for children to continue their education and the only way for them to break out of poverty. For several children, the school lunch is their only meal. There are several heart-breaking and heart-warming accounts of such children, their teachers and the volunteers that is a must-read at www.akshayapatra.org.
What is heartening to note is that the Foundation has won awards for its financial accounting. With many high profile individuals and institutions amongst its donors, financial transparency is obviously high on its priorities and rightly so, as the tiniest smear of impropriety would affect thousands of young lives.
It is happy to welcome donations of even Rs 500 – even this is enough to feed a child for a whole year. It is happy to permit visits to its kitchens – the big centralized ones that churn out 50000 to 150000 meals daily and the little decentralized kitchens in difficult to access rural areas. It also welcomes volunteers who want to work with the Foundation.
Along with increasing classroom attendance, the Foundation seeks to remove malnutrition, caste bias and to empower women by employing them. A noble mission indeed.