In Pursuit of Passion

Art can boost tourism a lot more than tacky ads. Anyone who views Ganesh Doddamani’s richly textured images of Hampi would go there in a jiffy.

It is odd how contrary advice can be. A professor in the Davanagere art college told Ganesh Doddamani,“ Work on creating one good painting instead of ten bad pieces.”

Soon after, Doddamani visited an art mela in Bangalore and was stunned to see the skills on display by art students from Kolkata. Feeling that he could never learn to paint as well if he stayed on in his college, he dropped out and went to artist Shambhu Das in Kolkata.

Das told the young man that he wanted guru dakshina, and with great trepidation, Doddamani asked him what it entailed. “ I want 500 works of water colour from you”. Thrilled with the answer, Doddamani promptly set about painting. He soon realised that he could not paint more than three a day and that it would take him the whole year that he had planned to spend in Kolkata to complete 500 pieces.

He explained this to the master who replied, “ Exactly, by the time you are done with 500 pieces, you won’t need a master.” This was completely at variance with his earlier professor’s words but was the best advice anyone can get for any work. Practice does make perfect.

I met Doddamani at Art Bengaluru – a fabulous concept where various art galleries display fairly affordable art across genres in a public space. Of all the artworks on display, his oil paintings of Hampi shone with a radiant charm.
He told me that he had quit his job as an exhibition assistant at the Visvesvaraya Industrial and Technological Museum as the bosses did not want him to exhibit his works. Two years on, he’s quite happy with the decision. “An artist’s life is always a struggle but my works are selling fairly well and I manage”, he says.

His whole life has been a pursuit of passion. He had decided that he would study art even while he was in school; after early disappointments he joined Shantiniketan for his master’s degree.

“It changed my life. The peace and calm I experienced in that atmosphere, especially after visiting Gurudev’s meditation spot inspired me to paint the face of the Buddha. It was immediately bought by a local businessman who told me that the image gave him a sense of serenity whenever he looked at it”.

Doddamani has focused on painting only the visage of the Buddha with an attendant motif of flowers. “We recognise a person by their face and it is the Buddha’s calm face that I want people to look at when they enter a room”.

In complete contrast to the soft, minute transferred pastel colours of his Buddha series, the Hampi paintings have thick strong applications with warm and vibrant results. “I hail from Ramdurg, just about three hours from Hampi and I have visited it very often. I had long thought of painting it but the burst of creativity happened only recently”.

The focus in his artworks is not so much on the famed architecture of the place but the play of light and shade. “Each time I visit Hampi, I see it anew”, he says.

His paintings created a surge of interest from our group to revisit Hampi and it struck me that the tourism department ought to use artworks to entice visitors to the heritage city of Hampi rather than tacky ads. Would that be asking for too much?

Read the story on the Goa Herald 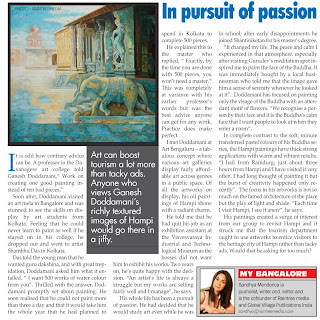 Share :
Cycling around in Bangalore
Varun Agarwal 25 and living it