Coming in all the way from Sweden, metal giants Opeth were back in the country on their second visit and they set the city on fire.

Kingfisher Premium has been instrumental in introducing Indian audiences to some of the most prominent DJ’s and artists from across the globe. With Lamb of God setting the benchmark at last year’s fest, it has only gotten bigger this time. Known for their versatility, with compositions ranging from death metal to blues and jazz-infused tunes, Opeth headlined the fest this year.

I caught up with Opeth drummer Martin Axenrot who told me all about their latest album and what he is looking forward to here.

Heritage (their 2011 album, which departs from their usual style of death metal) is less processed — why?
We wanted it to sound as it sounded in the room when we recorded it, and we wanted to try to get that in-the-moment sound that you get when you record live.

What do you think of the Indian metal scene?
I am actually not that familiar with it, but I have heard that there are a lot of things happening over here. It is a lot of fun to be in India again and explore a bit. We are in a different city this time than last time (they played in Chennai in 2009), and we have been told that Bangalore is the rock capital of India, so that is very cool and we are excited. We have been here a couple of days now.

Your expectations from India?
Not much actually, but we would like to meet all the fans we have here. The audience can expect us to give a 100 percent of what we do best.

Opeth performed in Bangalore on February 5 at Palace Grounds.

The Opeth song list at the fest in Bangalore was: 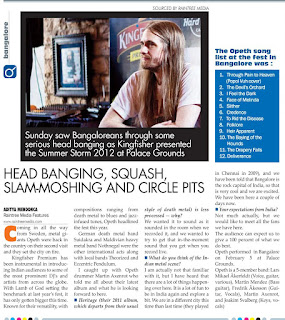