Slightly-built Paul Fernandes is the opposite of in-your-face. This characteristic works in his favour as he recedes into the background and observes everything and everyone with a keen eye. His observations become fodder for his delectable cartoons.

Just as Goa has been immortalised with loving amusement by Mario, Bangalore plays muse to Fernandes. Or rather a slice of Bangalore that he is familiar with – the ‘Cantonment’ side. Over the years, as he has captured the idiosyncrasies of the city and its denizens, we have split our sides laughing at the images which vividly remind of us places and people we know.

Sadly though, the IT boom of the 90s and the haphazard development that it set off changed Bangalore drastically. The heydays of the city can only be viewed at Fernandes’ new gallery aPaulogy. Just across Richards’ Park, it is in a small and simple building where locals can take a walk down memory lane and newcomers get introduced to a juicy slice of the city’s history. One room is dedicated to his impressions of Bangalore in general, the second is for his part of town Benson Town and its surroundings, and the third is his homage to music.

I don’t really need a guide but I want to hear young Jatin’s spiel and he sets about giving nifty descriptions of each drawing’s inspiration. From the ‘overnight guest’ at Shoolay police station (now renamed Ashoknagar police station and relocated as the old building was pulled down), to a nose-in-the-air couple at Bangalore Club to old man Koshy (restaurateur) and his friend warbling arm-in-arm to the aunty with knee-high socks and red ribbon returning from church, there are quirky stories of local characters that the pictures vividly capture.

It is not the expressions on the faces but also the authentic lines of the buildings that seem to surge with vitality. The images are part of our collective memory and I feel an almost physical pain in my tummy that I recognise as regret for times gone by.

I ask Fernandes, “There is such a strong strain of nostalgia running through your work, tell me if you approve of any of the changes? Is there is anything positive in what has happened?”

“Oh yes. Take Richards’ Park for example. It used to be a dry dusty hole and look at it now – it’s green, full of birds and bees and you can breathe clean air,” he says.

He would make an ideal candidate for one of his own pictures; quiet, almost reclusive, he has suffered a career in advertising. He hates meeting clients – he just wants them to buy his work without all the talk that accompanies a transaction. The naughty twinkle in his eye gives an inkling of his talent but he is a kind man. While always humorous, his portrayals are never hurtful.

Referring to the recent furore over cartoons in a text book, Fernandes says, “While politicians make for great cartoons, you can’t make fun of certain situations as minds are not mature enough to appreciate it. It is a delicate line.”

I ask him about the general opinion over Indians having a thin skin but he disagrees. “Indians do have a great sense of humour or how else would the poorest of our poor be able to smile and joke in the most horrible circumstances?”

aPaulogy Gallery sells copies of the prints on order and if you are not visiting Bangalore, you can visit it on www.facebook.com/aPaulogyGallery. 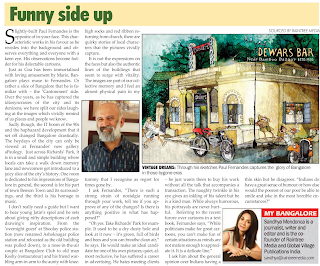