A strip of nondescript buildings and shuttered shops by day, the lane is transformed when dusk comes calling as a flurry of activity takes over. This is Bangalore’s very own food street.
The buzz is palpable as food carts wheel in, hawkers claim their place and tiny shops roll up the shutters, fire up the stoves and get ready for the droves of people who faithfully turn up each evening to gorge on the food being dished out, undaunted by the not-so-hygienic conditions on Market Road, Visveshpuram.

As intrepid traveller and foodie Anthony Bourdain of the No Reservations fame once remarked, “Street food is the best of a country – and strangely, much safer for you than the spaghetti bolognese at the Hilton.”

Known as the Food Street, it is the perfect place to satiate your appetite and what’s more the food is yum and easy on the wallet. You don’t have to stop at seconds. Come weekends, it turns into a mini-carnival with crowds milling on the streets, whirring pinwheels and fluffs of sticky pink cotton floss.
Dosas, idlis, bhajjis, chaat, corn on the cob, steamed groundnuts, gobi manchurian, pav bhaji, akki roti, holige, gulkand, masala soda, hot jalebis and refreshing badam milk – it is an all-vegetarian menu here.

Tucked away on one end of the road is VB Bakery, that is something of an institution in the locality and famous for its assorted breads, rusks and other baked products. It is particularly known for its congress buns with peanuts and butter stuffing, and dumroot halwa (pumpkin halwa).

A few steps down, at the Subramanya Fast Foods molten orange jalebis are sizzling in the wok. Relatively new, Srinivas who mans the shop says they are already doing brisk business. The crowd, mostly college-goers and families, picks up after eight but it is weekends that bring in the most business.

On the other end of the street is Dev Sagar where a man expertly prepares the bhaji undeterred by the waiting audience. The owner Om Prakash Agarwal recommends pav bhaji, Raj kachorie and rasgolla chaat. There is also the Gujarati dabeli, malapua (pancakes), chiroti/ pheni, and an array of Bengali sweets – many of which are traditionally served at weddings.

Agarwal says that the best way to experience the food street is to sample a snack or two at two–three joints instead of making just one stop. The shop has been here for five years and has already earned a reputation among regulars like college-goer Sunitha, who is a fan of the spicy Bombay vada pav and badam milk served here and the puliogare (tamarind rice) served next door.

Right opposite is the Vasavi Dosa Camp that serves up more than just dosas. Madesh has been here for over fifteen years now and spends the day preparing the batter for dosas and idlis, chutneys, and the dough and filling for obattu (a sweet flatbread also known as holige and puran poli).

Shivanna’s Gulkand Centre is highly-recommended by regulars. It specialises in gulkand, which is rose petals preserve. It is served topped with butter and fruits or ice cream. For Ashok who likes to do a round of the stalls with his family on weekends, the coffee that is served from a van parked near the Gulkand Centre and the corn and chaat served at the push carts are a must.

The food street is open for business from 6pm to 11pm.

Read the Goa Herald on: 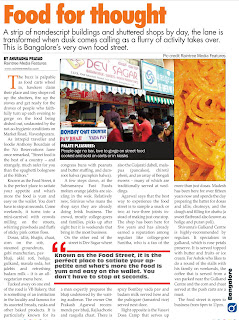 Share :
Push the tempo
Bangalore’s got a hole in the wall