Srikant Salecha is certain that he will not study engineering; Pranav Shankar finds solace in photography and Janardhan Mahadev loves graphic design – These are just some of the members of the team from Bishop Cotton Boys School, Bangalore who won the International Space Settlement Design Contest held at the Johnson Space Centre in Houston, USA from July 29 to August 1. The ten-member team has done the country proud by winning the contest despite being pitted against teams from all over the world. Their feat also marks the first ever for a school from South India at the international competition.
Upon reaching the finals, the teams had to combine to form a company that undertakes the task of preparing a plan for settlement. The Bangalore boys had to design a settlement on Mars by forming a company with teams from Wales, Romania and USA. Debarun Dhar, who went on to become the Vice-President of the company for the competition, says lightheartedly, “I think my biggest learning would be the awesome accent I picked up by interacting with the Romanian and Welsh teams”. 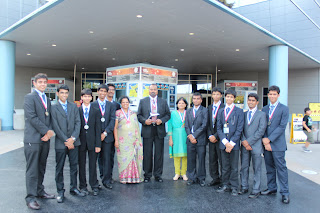 “I think we won because our team was innovative and we met all the minimal requirements set by NASA and of course we didn’t sleep throughout the competition,” says Issac John. The boys reached the finals after a gruelling year where they went on to clear the national round by designing a settlement in an asteroid belt and then making it past the Asian level where they were asked to design a shuttle service between Earth and Mars. It was during the Asian finals held in Gurgaon in February this year that the boys bonded which helped them in the US. “We had a two-day journey back from Gurgaon. On the train, all of us linked our laptops and played videogames,” grins Shubham Joshi.

All the members of the team are students of Class 12 and most of them will be appearing for entrance exams next year. One would think that a year of painstaking work and research would have made them neglect their studies but the students admit they managed just fine, also finding time for sports like tennis and football. “Our school and our parents have been extremely supportive. We don’t think that our studies have suffered in anyway. In fact, I think this experience will help us in our professional lives,” says Tejas Rai.
The two teachers who accompanied the boys, Asha Balaji and Neelam Patil, Heads of the Physics and Computer Science Departments respectively, admit that they not only mentored the boys but also mothered them during the competition. “In fact, members from other teams came to us for counselling,” says Asha. The Bishop Cotton team was amongst the few teams that were accompanied by their Principal, John K Zachariah. “It was an absolutely fantastic experience. I have received accolades from all over the world, especially from ex-Cottonians. In fact, one of them wrote saying that he would rate this achievement the best in the history of the school,” he says beaming with pride.
On the concluding day of the competition, the boys were treated to an interaction session with astronaut Nicholas Patrick who spoke of his stint on the International Space Station. Strangely enough, none of the boys have thought of taking up aeronautical engineering in the near future.
-Raintree Media Features
Share :
Learning on a Full Stomach
Kitsch Hits Karnataka