Flavour of the season

Come late summer, it is the mangoes’ moment in the sun. Visitors at the mango and jackfruit fair at Bangalore’s green spot, Lalbagh were spoilt for choice with around 10 varieties of mangoes from across Karnataka calling out to them.

June is the time for the Mango fair organised by the Department of Horticulture for the last 10 years. Crates of mangoes of different hues – from vivid greens blushing a deep red to sunny yellows, and bulky jackfruits which have been included in the fair have seen throngs of buyers.

With a spread of 70 stalls, this year’s fair exceeded last year’s number of 50 and offered around 11 varieties – Alphonso (badami), raspuri, sandura, bangapalli, hybrids malika and amrapali, malgoa, kalapadi, sakregutla, totapuri and neelam. Of these the totapuri is available till July while neelam is available till end of August. The omelette mango is ideal for pickling. New varieties include valaja (with a small seed and more pulp) and dussehra, which is normally grown in north India.

The farmers came from districts around Bangalore: Ramanagaram, Kolar, Chickaballapur, Tumkur and Chitradurga.

Dr SV Hittalmani, Additional Director of Horticulture (Fruits) said that they have strict guidelines where quality is concerned and only allow farmers who bring in naturally ripened mangoes. A team ascertains that the mangoes carry no traces of calcium carbide and are not immature.

The department hopes to bring together the producers and consumers at the fair. When consumers buy directly from the growers, the need for middle men, who pocket 50-60 percent of the profit, is eliminated.

Abdul Rahman has been coming here for 7-8 years from Srinivasapura in Kolar. He recommends the tiny and deceptively green sugar mangoes that pack a sweet punch. The sugar mangoes aka sakregutla can turn lemon yellow as they ripen. They were sold at Rs 34/kg instead of the Rs 60 at local markets. 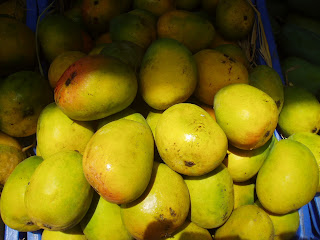 Ramkrishnaiah at Samrat Farmers came from Ramanagaram with 40 crates of around 6-7 varieties of mangoes and planned to stay till they were sold out. He offered the badami mangoes at Rs 50/ kg. Those who love pickles can stock up on the naati mangoes. Grated, it can be used with lemon rice. Naati mangoes are those grown on the roadside and of nondescript variety and are mostly unnamed. There are several of these growing in Lalbagh.

The low yield has driven prices up in the markets outside and the reasonable prices at the fair have made city dwellers quite happy.

Kadamba Organics, an organic society from Sirsi has been invited by the department since the fair’s inception and sell jackfruit papads and chips, and sugar dipped amla. They also sell sukela, which is supplied to the Sports Authority of India. It is said to convert to energy quickly and aid in digestion. Found in the wild it is dried and sold with no frills attached. At another stall, there is also an array of mouth-watering homemade pickles to choose from. 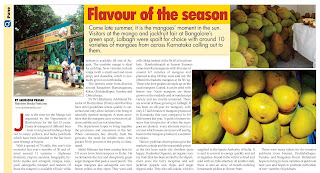