Cycling around in Bangalore

In a city where traffic delays, pollution and road rage are all too common, we have a few beacons of hope who choose to use cycles as their primary mode of transport.

Cycles are the most eco friendly way of getting around a congested, traffic jam prone city. There have been a few organisations which have been working day and night to make Bangalore a more cycle friendly city. Among these organisations is ATCAG, which is running a pilot project in Bangalore.

Their project is based on the Automated Bicycle Sharing System for Govt. of Karnataka, supported by Directorate of Urban Land Transport and Bruhat Bengaluru Mahanagara Palike. The pilot consists of just 3 docking stations comprising of 9 bicycles located in Central Business Districts around Bangalore. The idea behind the pilot is to get the people accustomed to the concept of Bicycle Sharing and also familiarize them with the operation of this automated transport infrastructure.
ATCAG currently does not charge anything for the use of these cycles, but will slowly graduate towards a nominal fee on an hourly basis. The response so far has been great and ATCAG has been in constant conversation with the Bangalore planning commission to chalk out specific cycling zones and lanes, all across the city. This project is currently underway and all the citizens of Bangalore are awaiting its completion with baited breath. ATCAG is also planning to install several docking stations across private campuses in hopes of reducing the carbon footprint of Bangalore’s many MNC’s.
Another organisation working towards making Bangalore cycle friendly is “The art of bicycle tours” team. Thanks to their efforts now even tourists are encouraged to use this eco friendly way to enjoy the city. Pankaj Mangal from the art of bicycle tours offers tours around Bangalore and a few other cities in India.

One of their most popular tours is the Passage to India tour. This tour takes you through heritage sites, picturesque country side roads and ends with a visit to Channapatna, a quaint little toy town that is famous for their exquisite craftsmanship.

When asked his views on cycling and the city, Pankaj Mangal said “Cycling could be a solution to all city problems like air pollution, noise pollution, traffic jams, health problems etc. It is a perfect antidote to a hectic city life. The current government has increased the import duty on bicycles by 30% which is highly absurd. The government should work towards promoting cycling in a city by offering income tax rebate for people who cycle to work, building cycling lanes and reducing import duty to 0% on international bicycles.”
Cycling is one of the oldest and most efficient modes of transport. You can easily weave in and out of traffic, give your credit card a breather from the increasing fuel prices and even lose a few kilos on your way to work. In today’s world of technology and modernization this wheel turning simpleton is the way to go. 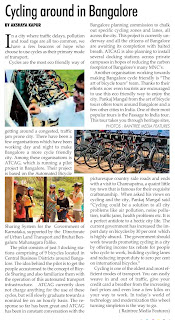