125 years is a glorious run for an institution and fittingly for erudite Chennai, the Madras Gymkhana Club chose to commemorate the grand achievement with a coffee table book. Time was short, but once they commissioned us, we did the near- impossible: researched, photographed, wrote, edited, designed, printed and delivered in 125 days.

‘The Glory Years’, an insight into the Club’s culture, society and the journey of its members, was launched at a crisply conducted event by Governor Surjit Singh Barnala with Andrew P Simkin, Consul General, US on September 5, 2009 at the Madras Gymkhana Club.

The coffee table book delves into the history of the Club since it’s inception in 1884 and tells the story of the Club’s formation and growth from the days of the British Raj and post-independence to the present. Interspersed with colourful anecdotes are eye-catching illustrations. The book chronicles the challenges and triumphs of like-minded and successful individuals that are a part of the Madras Gymkhana Club.

Speaking at the event, Governor Surjit Singh Barnala said “Books are a piece of priceless treasure. That too coffee table books are a class by themselves. They are referred to as illustrative or pictorial books. Coffee table books are usually visual oriented. They are for a light read and the analysis is often more basic. I congratulate Sandhya Mendonca and the Rain Tree Media for bringing a master piece “The Glory Years” on the Madras Gymkhana Club.” 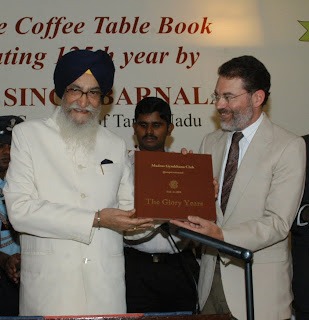 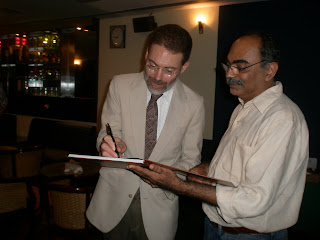 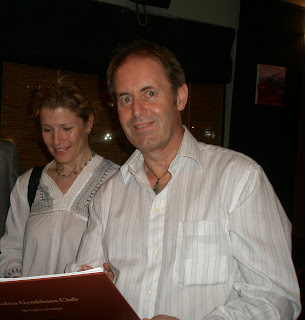 Deputy Consul General, Consulate General of the Federal Republic of Germany, Chennai, Axel Saurer and his wife at the launch of Madras Gymkhana Club’s ‘The Glory Years’.