Be blunt about your tresses

The spanking new salon in Bangalore is all set to spruce you up and let your tresses do the talking. 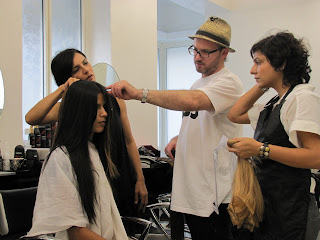 Picture this. You walk into India’s largest (read 6000 sq ft) ‘b:blunt’ salon, near Garuda Mall on Magrath Road and you are welcomed by a handsome guy, looking casual chic in a pair of blue jeans, a white tee, with garters hanging loose on the sides, a grey hat and piercing deep blue eyes that look right into yours waiting to pamper you.
The only thing that can steal your gaze from his is the hot pink that’s thrown around in the form of butterflies in a separate Blow-Out bar, or the fuchsia colour of the AC duct or the pink lamp shades that add the spunk to an otherwise black, white, grey and steel themed salon. There are separate rooms for Kerastase hair spas and another one for Manicure, Pedicure and Facials.
Run by Adhuna Bhabani Akhtar (she is Farhan Akhtar’s wife who has made a mark in the hairdressing industry for 20 years on her own) and Osh Bhabani, b:blunt is a brand that has made its mark in snipping, straightening and styling hordes of socialites and film stars’ manes.
Deepika Padukone who was flown down to launch the salon recently vouched for her tresses being snipped by Adhuna for a movie. After I surrendered mine to the care of Brent Barber, the salon’s chief hairdresser, I knew just what she meant.
Piqued by Brent’s surname, I can’t help but inquire; “It came from my grandfather who was a barber”, he says. After asking keen questions about my lifestyle and the kind of clothes and accessories I like, Brent suggests a layered look, as I didn’t want to go short on the length. (Haircuts start at Rs 650 upwards here).

Brent who began his hairdressing career over 17 years ago in his home city of Melbourne, says, “I was all of 14 when I knew I wanted to make a career out of hairdressing. At that age, it was the creative streak that I could give vent to with people’s hair that led me in.” “It was also the fact that I could come to work dressed quirky and cool,” quips Brent with his charming smile.

It was ultimately the bright lights of London that kept him going strong till his big break in 2005 when he won the title of ‘British Men’s Hairdresser of the Year’. Styling the rich and famous and the bold and the beautiful – from the sublime Agyness Deyn and Kiran Rao to the ridiculous Rowan Atkinson to big wigs like cricket legend Shane Warne – it has been an interesting journey for Brent who is now all set to explore the Bangalore waters.

Walter who handles the Colour Bar and also trains people is full of interesting tales, post the success of the fun flick ‘Zindagi Na Milegi Dobara’; he shares, “I travelled to all shoot locations and as part of b:blunt, styled the complete look of the stars. We also did ‘Dil Chahta Hai’, ‘Dhoom 2’ and ‘Rock On’ and now we are going to be working on ‘Don 2’.”

If you are worried about being in or out with the current trend, fret not; Brent assures, “It’s never generic. Every colour and cut can’t be industrial, it has to be for the individual, it has to be tailored for you.” His words reflect his firm belief in ideas, his passion, hard work and dedication in ensuring a consistency in offering the latest trends, qualities which have put Adhuna, Osh Bhabani, Avan Contractor and Brent at the top of their profession today.

Share :
Howzzat! Cricket goes hip-hopping
A Sunday with a soul