An angry harmony, made melodious

It may be pocket-sized, it may look like a toy, but is one of the most difficult instruments to learn to play. As for the price, it ranges from a couple of hundred rupees to over two and half lakh rupees for the gold plated versions. Blow on that!

Sometimes people you meet take you by surprise. A friend who’s part of a harmonica club – apparently there are several across the country- called with an invitation to meet a ‘wizard’ and for the most part it was like encountering a fire breathing dragon.

He looked pleasant enough but one did not even need to scratch the surface to realise that Choudury is an angry man. At times during our conversation, I felt that he was on the brink of an apoplectic fit.

What makes him angry is that the harmonica is not treated with respect in India. He says people like Raj Kapoor made the harmonica into a cheap toy by portraying it as the instrument of idlers.

He took up the harmonica as a boy in Patna and trained himself over the years. He came into his own in Kolkata, playing with many popular musicians at Trincas and Blue Fox, and had a band the ‘Bloworms’. He started playing music for films after meeting music director Salil Chowdhury, whom he regards as his mentor.

But music was only a hobby for this IT consultant; he left India as a young man to discover the world and travelled across many countries before settling down in the Netherlands.HMV produced a few of his harmonica albums that include Salil Chowdhury ‘Durer Thikana, Hindi songs of Kishore – ‘Tribute to Kishore’, ‘A Tuneful Tribute to Salil Chowdhury’.

Since retiring, Chowdury, who has created www.salilda.com as a comprehensive guide to Salil Chowdhury’s musical genius, has also produced two music albums – a passion that brings him to India annually.

Hobby though it is, the musician’s angst stems from the fact that his instrument is not taken seriously in India. “The harmonica is one of the most abused instruments in India. How do you account for the fact that there is not a single world class harmonica player from here?” he asks belligerently.

“Unlike in Europe, here there are no institutions that teach how to play harmonics; there are some self-appointed teachers but they do not teach in a methodical way.” he laments.

Playing Indian songs adds to the problem as Indian music does not have notations; the composer does not provide sheet music, everybody plays by the ear and since each person’s hearing is different, the music never sounds the same.

Choudury is perplexed at the lack of interest in a serious study of this instrument; he’s met people who learn the violin, the guitar and piano, so why not the harmonica? He hopes that musicians here access learning material from the internet and practice.

It may be pocket-sized, it may look like a toy, but is one of the most difficult instruments to learn to play. As for the price, it ranges from a couple of hundred rupees to over two and half lakh rupees for the gold plated versions. Blow on that!

Ending on a happy note, Chowdury teased us with a medley of numbers that we tried to quickly identify before he moved to the next song. Sweet music indeed.

Read the story on the Goa Herald 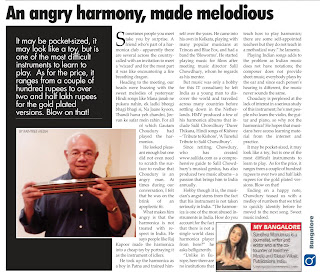