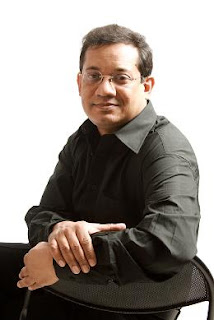 With deep sorrow, we note the demise of Allen Mendonca, Founder- Director, Raintree Media. He passed away in his sleep on Sept 28, 2009. He was 49.

In a career spanning over 25 years, he had written on diverse subjects – crime, political commentary, theatre, music and film reviews and travel features. He was most famous for his hard-hitting style of taking on errant powers-that-be in public life.

He started his career while in college, working for Southern Speaker, then moved to City Tab and Evening Herald, before joining Indian Express. This publication’s crusading zeal was right up his alley and he soon gained a reputation for gutsy reporting.

He next joined the Times of India, Bangalore as Head of the Business Bureau before taking over as the Head of the Metro Bureau. His pithy column ‘Metro Matters’ took up cudgels for the travails of the city. His Sunday columns where he interviewed writers, artists and their ilk brought to splendid life his felicity with words.

He was the Editor of Bangalore Times and was responsible for its remarkable growth in a short period.

In 2005, he co-founded Raintree Media and continued to be Director. He was simultaneously Editorial Director of Explocity group of multi-city publications. He continued to write for several national and international magazines and books.

He had just commenced a final revision of his first novel which Raintree Media will soon be publishing.

Team Raintree derived great strength from his wealth of knowledge, his ability to focus on the basics, his keen eye for detail and his inimitable writing. His genial smile did not mean that we could ever do anything that was less than excellent. We miss him sorely; and are determined to forge ahead and achieve our fullest potential as our tribute to his life.