It is summertime and the choice of tipple is obviously beer.

For Bangaloreans of course, beer has been a perennial favourite, with United Breweries located here. We could inhale the aromas as we walked past the brewery on Grant Road; it shifted to the outskirts quite sometime ago and in its place stands the plush mall UB City on the rechristened Vittal Mallya road.

But coming back to beer, the beverage came to India through the East India Company to quench the thirst of the hordes of Englishmen who were here to colonise the land. But when the ships unloaded their cargo, it was found that the ale from home could not survive the choppy sea voyage with its flavour intact.

An enterprising brewmaster concocted a beer with a higher ratio of ‘hops’ (the plants whose cones give beer its bitter taste and aroma) to suppress bacterial infection and to retain the distinct taste. The new brew was christened ‘India Pale Ale’ or IPA.

IPA went down the gullets of the colonials so well that they demanded it even when they went back home. Indian beer brands are available in several countries including UK, where some of our brands are firm favourites. 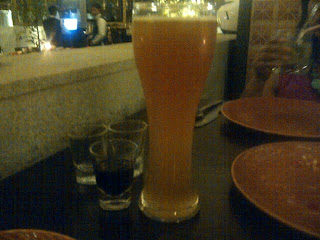 The British tradition of stand-alone pubs with character is fading; recession led to the pub-owners selling out to chains that recreate a standard look and feel. Ah well, that is the principle of survival of the fittest at play, as Britishers Herbert Spencer and Charles Darwin have said.

Along with being a mainstay for locals and travellers, the British pub contributed to English grammar, too. The phrase, ‘mind your Ps and Qs’ was used by publicans in England when telling their customers to mind their own Pints and Quarts and not pick up a fight with other customers.

Those guys knew how to run their pubs; their customers did not have to struggle vainly to get a waiter’s attention for a refill. All they had to do when their ceramic mugs ran dry was to blow on the whistle on the handle; that’s where the phrase ‘wet your whistle’ took hold.

This city was once famous as the pub capital and the place where people flocked from across the country to guzzle the brew and hop or crawl from one nightspot to another. Our nightlife has lost its sheen in recent years with early closures, ban on live music and dancing, and oh, so many other restrictions but occasionally we have a delightful treat.

Last night was one of those happy moments at the old haunt Tavern at the Inn. My friends ‘Saggy’(Santosh Gnanakan) and Chris Avinash with their band Retronome played evergreen pub favourites – Deep Purple, Floyd, U2, Bon Jovi, Doors, GNR and more. That was one good night and the draft beer must have been drained to the last drop.

Read the column on Goa Herald:

Share :
Soup and more for the soul
Setting the course on fire!