Add clay to your life

With its wide roads lined with sprawling trees and houses sitting back in quiet grace, the area around Ashoka Pillar is my favourite locality in Bangalore. The Pillar marks the beginning of the city’s largest planned residential zone, Jayanagar, named after the late Maharaja of Mysore Jayachamaraja Wodeyar who inaugurated it in 1948.

The symbolism is apt for this demure entrepreneur who worked as a visualiser and did hotel sales before starting to design terracotta ware. Over time, Shashi Bagchi has created a niche business for gardenware in her ancestral home near Ashoka Pillar.

‘Maati’ (as her business is called) displays its wares under the cover of a bamboo roof and its very openness and simplicity are an irresistible invitation to passers-by. There is a bewildering variety of choice that ranges from standard clay planters and birdbaths to quixotic animal forms: a pig plump with contentment, a pup in blissful sleep in a basket, a dog’s derriere as it digs for a bone, caterpillars with mischievous smiles, frogs, snails, squirrels, crocodiles and gargoyles.

An enchanting triangular stretch of garden hosts some of the gardenware, though there are plenty of options for apartment dwellers – plant holders shaped like coffee cups are eminently suitable for the kitchen or breakfast area. Others shaped as snails, tortoises, frogs and rabbits look charming in bathrooms and sit-outs. Some customers buy them just as display pieces without wanting to plant anything in them.

That might be good for business but the couple is driven by the need to green the city. They might offer their space for expert gardeners to teach enthusiasts. They have not made up their minds about pottery classes yet as the studio is located on the outskirts of the city.

Shashi conceptualises the design and works on the wheel initially and after the craftsmen have got the design right, she leaves it to them.

It has not been an easy journey; when she began in 2005, traditional potters were very lax about executing orders. “We did not bargain with them, we paid them their asking price but they did not stick to the timelines and the quality of the ware was inconsistent,” she says.

The disheartening part was that the potters were resistant to making anything other than the large pots and urns that they had been doing. “The market for such pieces has dwindled as most people have switched to plastic containers. If we have to keep terracotta alive, we need to come up with designs that appeal to the new style of living.” Over time, she detected a spark of interest in a couple of younger potters and has cultivated their craft patiently. Along with the gardenware, she has delved into making terracotta cooking vessels, masks and murals.

Handling the creative, production, and sales and marketing is an extraordinary challenge and I identify with the constant struggle of the small entrepreneur. Unexpected changes can increase costs; Maati’s potters don’t use firewood for baking the clay, they use the leaves of the silver oak and this was free for the picking. But with the BDA acquiring more open land to make them into housing plots, Shashi has to buy bags of leaves.

This makes the price range all the more impressive as it ranges between Rs.100 to Rs.900 (for the biggest pieces).

Maati’s mission is worthy of support – for one, plastic pots are abhorrent while clay pots allow the plant to breathe and thrive. Two, producing pieces that add character to homes and gardens is a good way to keep the traditional craft of pottery alive. 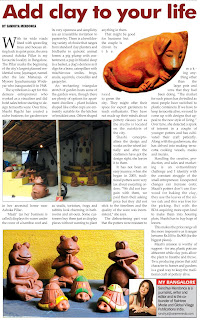 Share :
Rain and the city
Mirror, mirror on the wall