A tribute to a time that was

Delicate, haunting and evocative, Shibu Arakkal challenges himself and the viewer with his new photographs 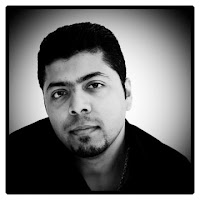 Artistic inspirations emerge from the most unexpected places and for Shibu Arakkal’s latest series ‘Finding Nowhere’, it stemmed from several visits he made to the countryside and lay dormant until he could not ignore that they told a story on their own.
Shot entirely in monochrome on a film camera, the photographs capture the vanishing landscape of a rapidly growing city. It’s a tale that speaks of the artist finding shelter in the hamlet of Magadi; a town situated an hour away from Bangalore. “Whenever I tire of shooting in the city and the same old urban chaos and scenarios, I like to drive across the countryside hunting for something new and different. But look around you – Bangalore’s surroundings have all yielded to buildings!” he exclaims in frustrated disgust. 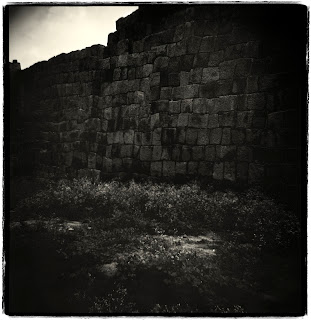 When a friend first recommended Magadi, Shibu was incredulous as Magadi Road is one of the worst traffic zones, but he was persuaded to visit the town which has become more of a hamlet really as time seems to have forgotten it. He says, “Magadi to me is such a place, one of retrospection, of things very real and of recluse. And if solace of a fading world does find you along the way, then I suppose it is somehow apposite”. 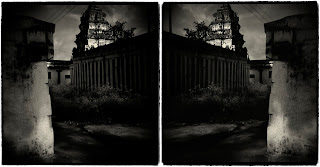 Over the years, it became an oft-visited site for him, as the drive is very scenic and he took many photographs in and around Magadi. It slowly dawned on him that there was a series emerging from his random photos.

Finding Nowhere is a series of 21 photographs, shot entirely on film in the old school photography black & white style. Shibu’s favourite palette is sepia. He shot the entire series on a Diana F + camera by Lomography. The plastic-bodied box camera costs just $30 and has a cult status. Using 120 roll film, most versions take 16 photographs per roll in a non-standard format of 4.2cm square using a simple plastic meniscus lens. The plastic lens helps give a diffused view adding to the romantic atmosphere of the picture. Shibu has many quirky toys; among his favourite is the Lens Baby (a freaky tilt and shift lens).

Though Shibu has a frenzied love affair with the digital world, having picked up on Photoshop very early, when nobody wanted to touch digital manipulation, back in 98, he is puritanical when it comes to shooting with film. “Shooting in black and white is where the challenge lies “. The tone and lighting are where it all happens, even after 18 years of experience, there is so much one can learn from them, black and white leaves room for a lot of interpretation “
A freelance professional photographer since 1994, his travels include countries such as England, France, Italy, Switzerland, Austria, Netherlands, Greece, Scotland, Turkey, Russia, UAE, China, Singapore, Thailand, Bhutan, Nepal and many parts of India. His works have been awarded prestigious international awards. His previous exhibitions have focused on ‘philosophies’ (‘Themes’ sound a bit shallow, he says) on the differences between the line and the curve, Skin (human), Absence (exploration of), space and architecture of the Eiffel Tower.

A tribute to Shibu, who incidentally is the son of eminent painter Yusuf Arakall, come from Jnanapith award winning writer, the multi-talented Girish Karnad, who says, “These photographs by Shibu Arakkal of Magadi village catch the majestic contours of desolation, almost making silence visible. The perfect stillness which he has captured in the rocks, temple ponds, and deliquescent walls, all haunted by their desolation, in turn transform the viewer into elements of the photographed moment, breathless in anticipation of the next shift in the light”.