A Man for all Seasons

“A man of an angel’s wit and singular learning. I know not his fellow… And, as time requireth, a man of marvelous mirth and pastimes, and sometime of as sad gravity. A man for all seasons.”

So said a contemporary of Sir Thomas More, about the morally upright Lord Chancellor of England who in the 16th century was sentenced to death for not signing a letter asking the Pope to annul King Henry VIII’s marriage to Catherine of Aragon. This was the issue that made England break from Rome. More chose to give up his post, sink into penury, be jailed and finally, executed rather than go against his principles.

At Arjun Sajnani’s production of Robert Bolt’s A Man for all Seasons last week, I felt I had never been in an audience that was more engrossed. Take for example, this exchange between the King and More “How is it that you cannot see (that I have to put away the Queen)? Everyone else does.”
“Then, why does Your Grace need my poor support?”
“Because you’re honest.”

Restaurateur Arjun Sajnani delights people each day at Sunny’s where with partner Vivek Ubhyankar, he dishes out delectable fare. Every once in a while though he lays out a treat for theatre-goers with impeccable productions. Just as he is with food, so too in his plays, Arjun is a perfectionist and his plays are as close as we can come to Broadway.

﻿This play which brought together a rare grouping of luminaries of English theatre – Ashok Mandanna, Naval Narielwala, Veena Sajnani, Vivek Madan, Aporup Acharya, Ashish Sen, Anil Abraham and Puja Chodha, also gave ample food for thought.
Arjun has in the past 30 years produced and directed a variety of plays – from musicals to comedies to intense dramas like Girish Karnad’s Tughlaq and Fire and the Rain, which he made into the film Agnivarsha. He tells me, “I am drawn to plays that have intellectual content as well as visuals that I can enthrall the audience with. It must have real emotional thrust and must hang together for me as a property in order for me to direct and produce.” 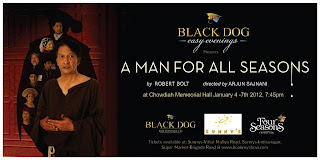 A Man for all Seasons is topical with the recent interest in corruption and the roles of the government and the citizens. Arjun had liked it when he saw a college production 35 years ago. His passion for the subject spurred him to action and staged it after long thoughtful discussions with the actors about the script and approach. “I also knew that my older actors were all at the right age to act in this property and score with it…like you said, the world sometimes needs to be reminded of values and morals and conscience and courage.”

At the very end, More tells his daughter, “If we lived in a state where virtue was profitable, common sense would make us saintly. But since we see that avarice, anger, pride and stupidity commonly profit far beyond charity, modesty, justice and thought, perhaps we must stand fast a little, even at the risk of being heroes.” If only we had a few like him around…

You can also read the column on the Goa Herald, Jan 14.