Flowing dresses, smart jackets, elegant trousers and exquisite scarves of the finest silk in delicious colours, from fuschia to emerald to peach to sapphire, adorned with intricate hand-embroidery, sequin work and block prints– these are some trademark creations of ‘Takla Makan’, a Pondicherry-based French design label inspired by the rich heritage of Indian fabrics.
Melissa de Valera started Takla Makan in 2008 with her partner, following a ten-year love affair with Indian fabrics which began while studying her Masters in Indian Studies at the Sorbonne University of Paris. Her course work subsequently brought her to India where exposure to the rich culture of fabrics and local craftsmanship spurred the decision to pursue a double Masters, this time in Textile Design. Melissa sought the National Institute of Design (NID) in Ahmedabad for her the final year submissions – two projects in Himachal Pradesh and Rajasthan.
That was in 2002. Melissa then spent the next six years, travelling across India, working with traditional craftsmen – an experience which eventually gave birth to Takla Makan.
“I was compelled with a strong desire to help the local craftsmen and promote and help sustain this rich heritage. That is the idea behind Takla Makan,” says the designer. Takla Makan has tied up with NGOs to work with weavers in Himachal Pradesh and Chattisgarh, block printers in Rajasthan and Gujarat and kantha embroiderers in West Bengal’s Murshidabad district. “It is more expensive to get the work done in these places but the money goes into education of their children so it is more satisfying.” 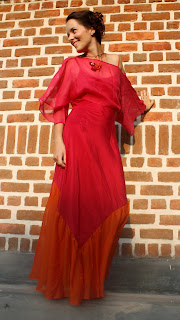 Quiz her on the choice of name for her label and she blurts out: “It means ‘bald house’ in Hindi!” Upon the puzzling look evoked by her answer, she explains, smiling, “The Takla Makan desert lies on the ancient Silk Route and that holds significance for me since I use a lot of silk in my designs. Also, this name was easier for people to pronounce, as opposed to a French name.” That certainly makes more sense.
Coming back to the clothes, while traditionally designers think up a particular design before choosing the fabric, with Melissa, it’s the fabric which inspires her designs. “It’s because I am originally a textile designer. I buy a fabric and the design follows. This is also why most of my garments are unique pieces or are very limited editions.”
She confesses that at times, it takes her as long as an entire year to conceptualise the design. “I have sat with some fabrics for a very long time – sometimes an entire year. I’ll be just sitting, waiting for the design to click and meanwhile not daring to cut the fabric because I don’t want to ruin it. Sometimes, the idea just comes instantly.”
With her fascination for fabrics, Melissa couldn’t have been wished for a better muse than India. “I am lucky to be in a place which has such a rich history and variety of textiles and traditional craftsmanship. I try to use Indian fabrics in a different way, mixing in my sense of aesthetics and colours which are more subtle than what you see in traditional Indian outfits.”
Besides silk, she also works with wool, cotton and other natural fabrics. “I purchase the silk mostly from Delhi and Chattisgarh and more recently, from the Sara Silk Store in Bangalore which has great fabrics and colours. The silk in Tamil Nadu is very heavy and they don’t fold as well for the kind of clothes I work with. Also, the colours here are brighter than what I usually prefer.”
Apart from the workshop-cum-showroom in Pondicherry, Takla Makan has a retail outlet in Coimbatore. Abroad, it has a showroom in Paris and also retails in Belgium and Germany.
“In Pondicherry, my clientele is mainly foreigners and people from Delhi, Mumbai and Bangalore. So far, we have focused on export, but for the near future, we are looking at retailing in the Indian metros which have great market potential.”