“15 Mantras for the Empowered Woman” is a challenging book 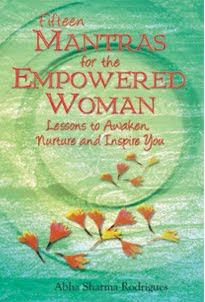 ‘Fifteen mantras for the empowered woman’ by Abha Sharma Rodrigues is a very clever book. All of us, men as well as women, are sure to find thoughts and actions that seem to resonate in our lives.

The author asked me to talk about my connect with the book today. The sections that struck a chord within me are the Mantra of Mind and Imagination and the Mantras of the Spoken Word.

Let me start with something simple. I got my driver’s licence when I was 19 but except for a few times when I borrowed my dad’s car, I hardly drove. By the time my husband and I bought our first car, I was 24 and pregnant. Since he gallantly dropped me to work and picked me up, often driving me to assignments too, I never got the hang of driving. I would attempt to drive on and off but never quite managed to master the skill.

Some years later, juggling between the demands of a long commute, a kid in play school and demanding careers that did not allow my husband the flexibility to pick up and drop us, I decided that I had to learn how to drive. I simply didn’t have a choice.

But facing the ever-growing chaos of Bangalore traffic was a daunting prospect. So one evening, I told myself – “Look at the guys who drive buses and autos. They are mostly uneducated, semi-literate people. If they can drive a vehicle, why can’t you?” That did it. My cousin spent the weekend sitting beside me while I drove, and viola! By Monday morning I was confident enough to drive on my own.

Since then, each year, I have attempted to do something that I have not done or to learn a new skill; one year it was a new language.

About six years ago, my husband Allen and I quit our jobs in journalism and decided to become media entrepreneurs. We started Raintree Media. This was actually my second attempt at being a businessperson. The first time around I had a small proprietary concern, Big Bean Communications. I had plenty of work but soon realized that I had a problem getting people to pay me. Disheartened, I gave up and took up an assignment at the IIMB before going back to journalism.

So what changed six years ago when we agreed to get into the business of media? What has enabled us to build a fairly successful business? The change was within my own head. This time around, I taught myself to clearly differentiate between Sandhya the individual who does not like to ask people for money and Sandhya Mendonca, the representative of Raintree Media, who will insist on timely payments. Today I am proud that our company is a singular entity – we have never sought financial assistance, have always paid our vendors on time, have grown by reinvesting profits into the business and pay our colleagues decent wages.

Time and again, we have rallied ourselves with such internal boosters. Each assignment comes with its own challenges and sometimes, when things seem daunting I recall a late afternoon in Goa.

A couple of years ago, on the 31st of December, we were on a beach and I realized that, I had not done or learnt anything new that year. My son was just about to go parasailing and on an impulse, I went along too. This from a person who is frightened of heights, even escalators in a mall give me vertigo. As I rose up in the air, the flapping of wind was like a roar in my ears. But soon there was a wonderful hush, floating so high above looking down at the setting sun, the blue water and the tiny sails was a magical feeling.

This is my visual mantra of mind and imagination, if I can call it that. Each day I conjure up that image in my mind and my cares and worries slip away as I experience that wonderful weightless feeling again. I rise energized and positive.

Never underestimate the power of the mantra of the spoken word. My husband of 20 years died very suddenly of a heart attack about four months ago. For our young son and me, the bottom fell out of our world. After a couple of weeks, as I stood weeping by his grave, I felt I heard Allen’s voice telling me to get back to work. I did, and within 2 months, we managed to publish his novel Sentinel House which has had a fabulous response. It is not easy to stay positive; the death of my beloved Allen who was my partner and my best friend has made me question the very point of life. In my darkest moments, I feel life is a cruel joke.

Then the words come spontaneously – a dear friend Rakesh Sharma, the astronaut, told me that I have to fulfill my potential as an individual. I continue to draw support from the immense pride my husband had in my abilities. Whenever I doubted myself, he said, “You can do it, go for it”. His words of encouragement are the mantra guiding me.

Share :
‘Table by the Window’ by Raghav Shreyas
His Excellency H R Bhardwaj, Governor of Karnataka with the Best of Bangalore