SHE is an expression of beautiful female energy

Women are inching towards the glass ceiling be it in banking, IT or performing arts, and it needs the combination of supportive measures by organisations and women’s own effort to break stereotypes to achieve a transformation. That was the essence of a Q & A at the launch of SHE, a book of contemporary verses and art that was released today as part of the International Women’s Day.

SHE is an all -woman initiative with the writer, artist, graphic designer and editor all being women. SHE has verses by Kavitha Rajasekhar, art by Shan Re, is designed by Mishta Roy and is conceptualised and edited by Sandhya Mendonca. The book was released by Rajni Mishra, Chief General Manager, State Bank of India – Bengaluru Circle and Pallavi Arun, singer, actor & filmmaker, at Galerie De’Arts, owned by Deepa Subramanian.

Speaking at a Q & A anchored by Sandhya Mendonca at the event, Rajni Mishra, Chief General Manager, State Bank of India – Bengaluru Circle, said that it had taken more than 200 years for one Arundhati Bhattacharya to become the chairperson of SBI and more than 100 years for Vijayalakshmi Iyer to become CMD of Bank Of India. The robust presence of public sector banks across the country has helped women overcome the irritants of geographical dislocation. Better working conditions, a level playing field, equal opportunities and sabbaticals that enable women to focus on children and then get back to work without losing out in their careers have helped women rise in the hierarchy. Though 40 percent of women in banks are in the clerical category, with not more than 5 percent in the executive category, it remains a long journey across the sectors, not only banking. But the transformation is happening everywhere.

Pallavi Arun, singer, actor and filmmaker, said that films remained male-centric as stories are written from the hero’s perspective and women are merely eye candies. The situation is better in music and more so in theatre. There is much less money involved and hence it is more democratic. However, there aren’t enough women in the technical aspects such as of light and set designers, make–up artistes, editors, colourists or engineers colourists – all of which are considered a “man’s” job. Women editors and sound engineers are not recognised by the mainstream media. They are slowly breaking out of their stereotype and breaking the ground in all the different aspects of making a film or a play or creating music. 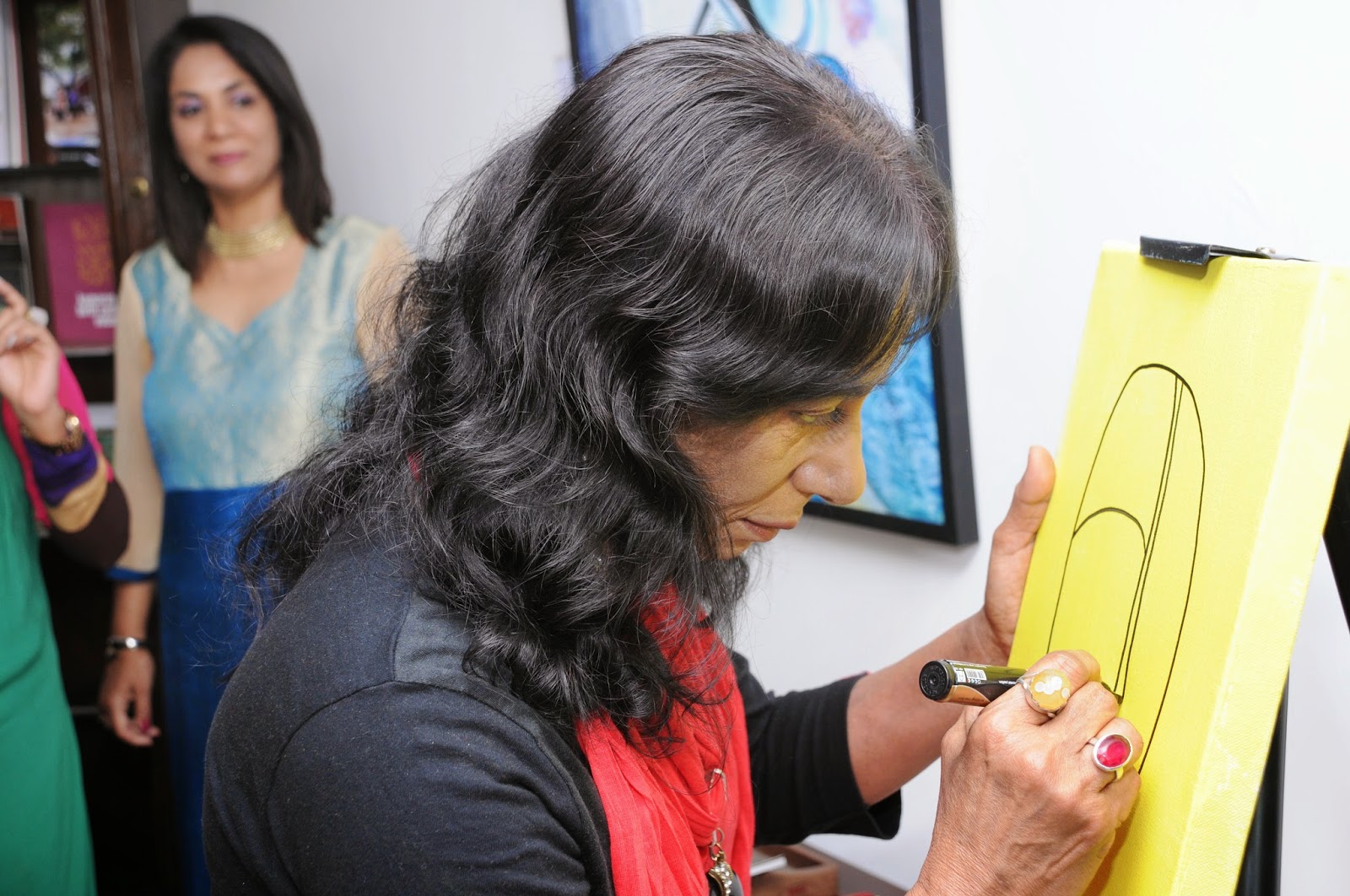 Kavitha Rajasekhar read out poems from SHE that resonated the feelings and experiences of women. Artist Shan Re created a work of art in front of the audience, which was bought by Shanti Baliga. All proceeds from the sale of the books and the painting are going to help feed AIDS affected children in the House of Hope*.

SHE is an expression of contemporary women’s voices – the verses reflect the dreams and aspirations, the feminine need for love and family, the aches and disappointments, the strength and determination. The images in the book complement and enhance the verses, and the stylised graphic design makes this little book a work of art in itself. SHE is an affirmation of beautiful female energy, from concept to publication.

Kavitha Rajasekhar, Writer, says: “SHE has been a passion, a transformative process and self-expression all rolled into one. It started off as a personal journey of documenting the range of my emotions and thoughts – that other women also experience every day. The book has taken a life of its own – the art that brings the words to life and the concept, colours and design bring character to the book. The end product is a work of art meeting life and a celebration of the female spirit itself. Every woman who reads it will find a poem, a piece of art or even a thought that is meant for her!”

Shan Re, Artist, says: “My women have a universal appeal and they are both poignant and lyrical…most often they are women with secrets. They look very innocent, tender but they are immensely strong. They look very sensuous, but they are highly spiritual, they have an air of romance and mystery about them, but they are compassionate, full of life, love and hope. They are silent, mysterious, deep and powerful like a frozen fire. This impenetrability and stillness does not mean of course nothing is happening below the surface; they are processing emotions all the time, and storing up impressions and experiences which will be used later.”

Sandhya Mendonca, Founder, MD & Editor-in-Chief, Raintree Media, says: “The whole project has had a serendipitous synergy. When Kavitha brought her verses to me, some of her sentiments struck a chord within me, and some others were similar to what I hear from other women. Twinning them with Shan’s works has added lyrical beauty to the poems which have a honest and simple flow. Mishta, our design collaborator, has brought a fine aesthetic sensibility in designing the book. From the very beginning, we had Galerie de’Arts in our sights as the venue for the launch because the warm elegance of the gallery and Deepa’s approach to work and art are in sync with ours”.

Mishta Roy, Graphic Designer, Drawater, says: “To be part of the special magic of women coming together and sharing their deepest thoughts and feelings, to create a book so poignant and honest and to learn what it means to be a woman, it inspired my heart, hand and mind to be as true!”

Deepa Subramanian, Founder & Creative Head, Galerie de’Arts, says: “I am happy to be the venue host for the launch of SHE. It is an opportunity to recognise and celebrate the core qualities of a woman that flow harmoniously with the natural energies of life. Let us celebrate every single woman born in this world.”

About Kavitha Rajasekhar: A journalist and writer by profession, Kavitha began her career in journalism with The Financial Express in Bangalore and went on to spend the next 13 years focused on technology writing and reporting across India and the Middle East. Four years ago, she gave up her full time position as a Group Editor for Technology Publications at publishing house CPI in Dubai to set up a bespoke consulting and go-to-market practice for technology vendors based in Dubai, UAE. In her spare time, Kavitha focuses on writing poetry and painting.

About Shan Re: Shan is a versatile artist who has explored a wide array of subjects and genres in several group and solo exhibitions in India and abroad since the year 2000. Her work has been collected widely and finds pride of place in several private and corporate collections across the world. Shan’s works provide the viewer with a revitalising sense of peace, stability and strong dynamic positive energy. The paintings used in this book are drawn from her series called Psycho-Pictographia (2003-05)

About Raintree Media: Headquartered in Bangalore, Raintree Media publishes the BEST OF series of international coffee table books, the Marvels of series of Destination photobooks, and other unique books in both its independent as well as custom publishing verticals. www.raintreemedia.com

*‘SHE’ supports the House of Hope:

The House of Hope gives 24-hour care through the year to over a hundred orphans who are affected by AIDS and to their siblings, aged 3 to 18 years. Forty percent of the children are HIV-positive. The proceeds from the sale of SHE is being donated to House of Hope to ensure that the children get balanced and nutritious meals. For more information about House of Hope, visit: www.hutindia.org