Setting the course on fire!

I caught up with India’s best female golfer Sharmila Nicollet, currently the youngest Indian at 20 to play on the Ladies European Tour.

You started your career at a very early age. Tell me about your journey so far.

I started playing at the age of 11 and it has been 9 years now. I have always been a very sporty person. I was a state level athlete and a state level swimmer. I have also played basketball for school, done horse riding and played tennis. I think I have played all the sports. I won my first tournament at the age of 14 and it was then that I decided to take up golf as my career. I have sacrificed a lot for sports.

How does it feel earning a full card on the Ladies European Tour?

I think it will be fair to start by accepting that it is a pleasure to be the youngest Indian and only the second after Smriti Mehra to earn a full card on the Ladies European Tour. I must admit, clinching the 30th and final spot on the Ladies European Tour Qualifiers Final stage with a seven-foot birdie was a special moment. Though I was the Co-leader after the first round and second after the second, I had to birdie from six feet on the third play-off hole at the South Course to seal the 30th and final card for the 2012 Ladies European Tour. It was easily the most testing time of my career as I ended up playing 165 holes, nine rounds and three holes in the play-off, in 12 days.

How was the experience of playing with golfers from across the world?
There were more than 200 players competing in the qualifiers, including those from the LPGA and Asia. The experience proved quite nerve-wracking, especially with the entire country backing me and everyone back home expecting me to do well under pressure. I had 12 rounds to play over 18 holes everyday and got a taste of the lead after making the cut. I shot an obedient five-under and one-under to emerge as the leader.

How did you manage to get your goal together and what is your next plan?

My goal was to get on the tour and as this was my first time in Spain for the qualifiers, it was a big achievement for me. I proved the critics wrong, which is an awful habit of mine and did not let their opinions become my reality. It is one of the best feelings to have. My next goal is to win a tournament in Europe and I am just so overjoyed and proud to be the only Indian on the tour now so much so that I cannot wait to start my escapades all over Europe. It is a beautiful scenic place with an intriguing culture waiting for me to explore. It has been a long wait and my fingers are crossed for the season.

Describe the overall experience. It must have been gut-wrenching.

After shooting a final round score of two-over 75 on the par-73 South Course, I clearly had a heart-wrenching time. I started on the 10th and was one-under for the first nine and in tied 16th position at that stage. Bogeys on second, fourth, fifth and seventh almost derailed my campaign, but I then summoned all my composure and birdied the par-4 8th hole, my 89th hole in the competition. The birdie on the eighth brought me back to seven-over and a par on ninth saw me end the 90 holes on the bubble. I then had to wait for more than two hours biting my nails before I would know my fate. Six players were fighting for two spots after tying for 28th place at the end of five grueling rounds at the Qualifiers. The LET rules called for a play-off for the final four places from 28th to 30th . It was literally a cat fight and I came through on the third play-off hole and clinched a full card.

The Spanish weather, it must have been something else?
The chilly weather in Spain did not help make matters any easier for me. It was very difficult for me to cope with the weather, playing with four-five layers of clothing on me which adversely affected my 3rd round.

I fought hard during the last 2 rounds and got myself into a 6 way tie for the last 2 spots on the tour. The three holes in the playoff were the toughest ever in my golf career that I had to overcome. I pulled my drives on the first 2 holes of the playoff and made some amazing recovery shots to stay in contention. I was very aggressive and was in my element by putting myself in a higher state mentally and completely engulfed myself in a zone. It was a revelation for me in terms of what I am capable of and that enhanced my game under pressure. Since one of the girls managed a card on the first hole itself, the rest of us were all fighting for that one remaining card. Just being in that environment was hard with all the live scoring personnel and the spectators around. On the 3rd playoff hole, there were three of us fighting for one spot. I had an advantage because it was a par-5 that I could reach. I managed to hit one of the longest drives that I had hit in the past few weeks. I hit a four-iron onto the green and left myself a 65 footer for eagle. I two putted from there to secure my card inspite of leaving myself a testy 7 footer for the birdie.

Despite a lot of pressure and what was going through my mind at that very moment, I managed to seal the deal. It was really the best feeling ever and now has got me closer to my dreams.

How does it feel playing at the International level?

I am still learning and I feel I have some ways to go before I can match up to the best players in the world. What I realized playing on the LET over the past few months is that I need to regulate my under par rounds and cannot comeback with a win from a big number like I sometimes do on the Indian tour. In my experience on tour you have to grind it out and minimise your errors even when things are not going your way. Clearly, I need to play better in varied weather conditions and the lessons I have learnt in Spain will help me tremendously. I have been working on my game, my swing in particular. My confidence is amplified after this tournament, my swing is shaping up well and my short game has improved tremendously in the past two years. I think I will be able to get myself into a winning position in the latter half of the season. I am hoping to play around 21 tournaments on the Ladies European Tour this year and I want to finish in the top 80 on the money list and retain my card for the next season.

I am also hoping to get some financial backing which will enable me to play the entire season without having to worry about my travelling, boarding and lodging expenses. I have been the top professional woman golfer in the country for the past two years and continue to be without a financial sponsor. While the men’s tour (PGTI) has managed a host of sponsors, I only have Nike supporting my apparel and equipment as of now.

What does the Indian women’s golf scene mean to you ? What is your take on it ?

The prize money is not very lucrative in the country at the moment in women’s golf and a lot of players I know are struggling in terms of sponsorship and funding. I think something needs to be done so that deserving players are given the opportunity to achieve their goals and make a mark on the globe. What we need is at least one international win to change the perspective of the corporate sector towards women’s golf. I hope that I will be able to achieve that one defining moment for Indian women’s professional golf and give the sport a facelift.

Your professional team that backs you, coach and caddy, what is your take on them?

My coach Tarun Sardesai has been working hard to help me get my game in shape. He is also the core member of a team that we have built to help me with various aspects of my professional life. I now know the importance of having people around you that are positive about your goals and dreams. Also with the expertise of my caddy Tom Foster on tour I believe I can score a win soon. It would be great if I can do well at the Evian Masters, even win it. My team is working extremely hard to make my dream possible

I have family in Paris and my dad stays there so perhaps I can get some help if needed. I made few good mates on tour, listened to many and spoke to a few. I would like to emulate someone like Yani Tseng or Caroline Hedwall who were rookies when they won four tournaments or so in the first year.
You are the most determined athlete I know. What is your fire-power?

I feel my country is supporting me. I will try my best to fulfill the expectations of my supporters back home and make them proud. I am going to use a strong resolve with a massive amount of determination to not only achieve, but to conquer my goals, and to get closer to my dreams.

Olympics 2016—I want to win a medal there. In two-three years, I want to move to the LPGA tour, which is my ultimate goal. I have been No. 1 in India for a long time. It is time I accomplished more. But I guess I will stick to playing on a single tour instead of shuttling between different tours.

Any advice for the next generation ?

I hope that my achievement will prove to be an eye-opener for kids, their parents and will encourage more youngsters to take up the game.

“Look good and play good; look smart and play smart. That’s what I believe in,” is her chirpy motto.

Read the story on Goa Herald: 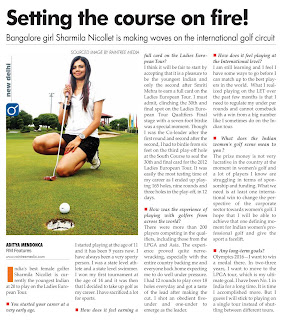