The art of persuasion

Indians have a big problem in closing sales. That is the considered opinion of experts. We have great ideas and when the deal is done, we are good at delivery. But, and it is a very big but, we have a hard time convincing somebody to invest in our idea or us.

I heard this from motivational speakers Dr John Demartini, Jeff Slayter and Kane Minkus. I could have easily taken this as just a sales pitch for their forthcoming workshop.

But not only were they speaking from experience, they were echoing the words of someone who deserves to be heard with respect – Ramesh Ramanthan, Founder of Janaagraha, who walks the talk.

This champion of public governance, and his wife Swati, gave up highflying corporate jobs in the West to come back to India. Spurred by the volunteer action of fellow residents in Connecticut, the couple decided to invest their time and fortune in making India a better place.
In the last decade, their efforts have made Janaagraha a serious voice in civic affairs. The most telling testimony is that several high achievers from the Indian civil services and the corporate sector have joined this organisation and its sister concern Janalakshmi which is rewriting finance models for the urban poor. I can write an entire book about the range of their activities – do visit their websites www.janaagraha.org and www.janalakshmi.com.

Anyone who has tussled with the system would know how frustrating it can be. Getting our elected representatives and officials to allow people to take their place in a participatory democracy is a daunting task. Not many would persist in a thankless job.

How then has Janaagraha become successful? Its results come from the passion that drives Ramesh, Swati and their committed team members. It is volunteerism at its shining best. Ramesh says that the Government put incredible obstacles in their path but when it was convinced of their good faith, transparency and capabilities, it has extended co-operation.

There are lessons here for us – not just of moral duty but also in applying the same ‘relentless’ (as Ramesh puts it) approach in getting what we want.

He draws a parallel between his single minded wooing of Swati all of 26 years ago, when he was willing to forsake everything to be with her, and their dedication to the cause of Janaagraha. Many people might not know the full extent of this voluntary organisation’s work; some might question its impact. “But you know what, it does not matter, we will persevere.”
Jeff and Kane say that in workshops around the world they have found that Indians are the most highly qualified academically and yet they struggle to find success.

The secret is this: if you are passionate about what you do, you can be successful. If you believe in it, you can sell your idea to others. If you want to convince your boss to give you a promotion, your client to give you an order, your partners to go along with your idea, you have got to believe in your premise and wake up every day with the determination to get it.

Sales is the art of persuasion and it is only when you have conviction in your cause whether it is of self-interest or civic sense, that you can be successful in persuading others. 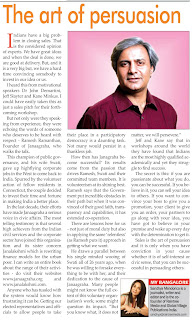