A train ride and the discovery Lakhan Das’s Coke studio 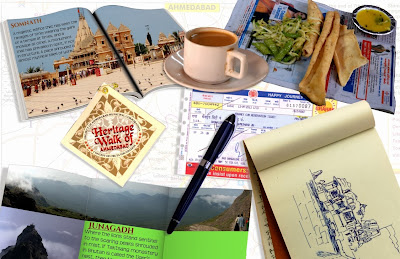 Gujarat is not a political statement. It is a state like any other, where you can travel and meet kind people, eat good food and visit memorable places.

The soporific rocking of the Jabalpur Somnath express had put me in a state of drowsiness that is inevitable in a train journey; the sort that dims the light in the mind with soft music in the background. Only here, the music is the clatter of wheels. But if you are lucky, you get to hear Lakhan Das. The mind rests comforted by the fact that your destination is still a good half a day away and there is no chance of you missing your station. The stupor deepens further when yours is the ‘last-stop’. But if you do oversleep, then you get to sleep in the train and save the 200 bucks for the room…and have a couple of beers with it. Oh! But no! Not in Gujarat, No sir. I was always wary of the G-state. Tell me, how is a traveler to rest his wander weary legs, quench his dry throat after conversing with many a stranger; parched as it were from the dust of a thousand miles accompanying many a caravan. OK, you can replace miles with kilometers and caravans with trains. But you get my drift, don’t you?

I have nothing against coffee or tea, mind you. I have spent many a pleasurable hour in office and elsewhere, with a hot cuppa in front and a few friends by the side. But when it comes to weary feet and parched throats, it has to be beer and nothing else. I mean, what a bottle can do, the cup cannot even come anywhere close!
The gentle swaying of the carriage accompanied by the rhythm of the wheels

hurtling over the tracks was again putting me back to sleep, when suddenly the rhythm changed. This was not the mechanical clang of metal on metal; it definitely was the practiced hands of a performer on a drum. And accompanied by a haunting voice, singing what definitely was a sufi song. I woke up from my stupor as the words set to a familiar melody seeped in…

कभी यासे को पानी पलाया नहं
बाद अमृत पलाने से या फायदा
When you did not offer water to the thirsty when they
needed it,
What is the point of giving them nectar afterwards?

He went on to sing the whole song that chided the people for their mindless beliefs and practices devoid of basic human compassion and kindness; the beliefs that make them worship a stone idol while turning a blind eye towards their own parents.

I had just noticed a station pass by- Ramparda it said. As I handed a 10 rupee note to the singer who passed by, I asked his name. He flashed his teeth from behind the matted beard and softly said, “लखन दास. या मेरा फोटो अखबार म आएगा?” (Lakhan Das. Will my photo come in the newspaper?)

I smiled back and shook my head.

This definitely was coke-studio on wheels. I had just witnessed Gujarat’s version of the train singers. If Odisha had its Mahatir da, then Gujarat had its Lakhan Das. There was something in his voice that made the bhajan sound so divine. Must be all the tobacco they chew. It laces their voice with a subtle intoxication that captivates their listeners. I was to notice the same something in the voice of the lead singer of the next troupe that performed. Yes, there were multiple performers that noon. The next one was more grand; a complete symphony of 5 performers, all on drums!

A majestic edifice that has seen the ravages of time. Wearing the garb of a temple at times; and a mosque at other. A place shrouded in almost mythical tales of yore; supposedly possessing a stone sculpture – devoutly sacrosanct to one religion, and blatantly blasphemous to another. That is Somnath for you! Located at the southern tip of Gujarat, by the beach, it houses one of the 12 jyothirlingas.

Somnath is a ‘paheli’ (a riddle). While today it is on the religious and spiritual circuit, way back it was on the traders and plunderers path. Located in Prabhas Patan in Veraval on the Gujarat coast, it was a prosperous port with a resplendent temple which supposedly housed a huge Shivalinga made of precious stones. A rich city that Mohammad of Ghazni looted many times and carried back many sacks of precious stones every time!

You should read Romila Thapar’s ‘Somnatha’ to really get to know of its many myths and mysteries. One of the legends has it that the stone idol present there was not a Shivalinga at all. It claims that Somnath housed the idol of ‘manat’, a goddess mentioned in the Quran; hence the name ‘su manat’. And since Prophet Mohammad had decried idol worship and branded it as
heresy, he had ordained that her idol be sought and destroyed. I guess that is what would be called a fatwa now. And so Mohammad of Ghazni came and plundered the place to uphold the prophet’s fatwa. A nice story to absolve him of his misdemeanors! I don’t know if its true or not, but it does make for an interesting story, As you turn the pages of the book, if you find that you are falling off to sleep, as I did at times, you can just wake up and board a train and visit the place instead.

The temple has been subject to so many annihilations that you won’t quite know where and when the original temple existed. Starting from the one built by the Yadava kings in 649 AD, the temple has been razed and resurrected an unbelievable number of times. It seems like the temple was the ancient version of ten-pin bowling. A reigning Hindu dynasty would set it up, only for a marauding Muslim ruler to come and bowl it over. The Yadava version of Somnath was destroyed in 725 AD by Junayad, the Arab governor of Sind. The Gurjara Pratihara King Nagabhata II constructed it again in 815 AD. And Mohammad of Ghazni promptly dropped by for his (in) famous invasions that left the temple in ruins during his 1024 AD conquests in India. Next it was the turn of Gujjar Paramara King Bhoj of Malwa to set up the tenpins in 1026, and along came Allauddin Khilji in 1296 with a bowling ball in hand. This game continued for many more centuries till finally, the last recorded construction that was left standing undisturbed was the 1783 version built by the consortium of Peshwa of Pune, Raja Bhonsle of Nagpur, Chhatrapati Bhonsle of Kolhapur and Queen Ahilyabai Holkar of Indore.

The version you see today is the brain child of Sardar Vallabhbhai Patel, who wanted to revive the Hindu temple as a symbol of unifying the newly acquired princely state of Junagadh soon after independence. The sepia toned pictures present in the courtyard of the temple narrate the resurrection story as the

temple was excavated in 1950’s and the magnificent monument in the Chalukyan style took shape. Like the Phoenix, it rose from the ruins of centuries past. In the words of Babu Rajendra Prasad, “The Somnath temple signifies that the power of reconstruction is always greater than the power of destruction”.

Of course all this, you can also read in Wikipedia (Somnath) also. But what you won’t get to see is Gujarat’s own version of ‘American Chopper’. The rickshaws made of 350 cc Bullet Engines, atop which the Veraval warriors ride, transporting everything from people to pickled fish.