Everybody wants a vacation in Goa. John Spence knows that well enough. After all he has made a fortune out of selling timeshare vacations in the sunny state with the Royal Goan Beach Club to well-heeled Indians.

Guess who else has fun in the sun at the Royal Palm Resort? One hundred children from the slums of Bangalore, that’s who. For two days at Camp Royal, the kids splash about in the sea, build castles in the sand, collect shells and have the time of their lives in an all-paid for holiday sponsored by Spence.

I first met this Englishman several years ago when he was setting up Haathi Mahal in Cavelossim and had the chance to catch up when he was visiting Bangalore earlier this week. In the interim between our meetings, he has made a huge success of his business setting up the Karma Royal Resorts in Bali, Phuket, Shanghai and in other locations in Australia, Philippines and the Chakra resorts in Europe.

I quiz him about his fascination for Indian names and he says, “The names resonate with me.” Laughing, he adds that Westerners like Asian and Indian mysticism and that the resorts in Europe will have Indian designs, Indian food and spas managed by Indians. “India is the instigator of our business; it gets under your skin – it frustrates you and inspires you.”

Having started off by selling his house to invest in his business, Spence’s company today is worth $55 million and employs 2000 people. In 2010, he was named the Ernst & Young Australian Entrepreneur of the Year.

“India was the beginning of my success story and I am a firm believer in giving back,” he said to me after visiting The Christel House Learning Centre where he has sponsored 4.8 million meals – breakfasts and lunches – over the last decade. The school, founded by his old friend Christel De Haan, educates children from slums in a modern building with state-of-the-art infrastructure donated by well-wishers.

Spence had brought his children along to the school before continuing a family holiday in Goa. “I am blown away by the school and I think supporting the children is the proudest thing I have done.” He celebrated his 50th birthday last year by stocking the school’s library with books and setting up a special learning centre.

“It’s all about karma,” he philosophises. “I am conscious of being lucky and successful, and I think it is my duty to help others. I know this is a simplistic understanding of karma, but I believe that the Universe tends to give you positive things if you are positive yourself.”

I am positive that the novel and delightful departure from the usual charity hand-outs by sponsoring a Goan holiday for under-privileged kids is sure to earn him good karma.

Read the column on Goa Herald: 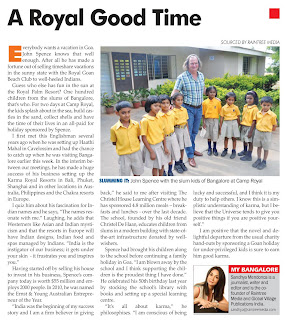 Share :
Team GVP in Mumbai
Soup and more for the soul