Doing different things and doing them well is Radha Thomas’s signature tune. I have known this spunky woman for over 15 years and always marvelled at how she can make music, write and
develop business for a publishing house with equal passion. 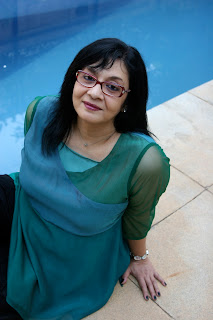 And now The Radha Thomas ensemble, the enigmatically named UNK, has released its first album ‘I only have eyes for you’ and is on a four -city tour to promote it. “I have been waiting for this my whole life”, says Radha Thomas, gratification coursing from her husky voice.

She is one of the early cool group of Indian musicians who skillfully adapted their training in Indian classical music to jazz. As a teenager, she was the headliner for the rock n roll band Human Bondage, India’s most popular band in the late 70s.

She trained with Kumar Gandharva at the Gandharva Maha Vidyalaya in New Delhi subsequently she learnt Drupad from Ustad Farid Ud Din Dagar of the famed Dagar Brothers before taking to jazz.

Back in Bangalore, she’s been performing at various clubs and festivals and holding a challenging day job as Senior Vice President of Business Development with Explocity. She recently finished writing the first of a humorous trilogy called, ‘Men On My Mind’.
She has released three albums earlier, but this is the one that is truly her own. As composer-singer-songwriter, she collaborated with yet another talented pianist from Bangalore, Aman Mahajan.
Educated in Berkelee, and a composer and arranger himself  Mahajan is the perfect counterpoint for the collaboration, with Thomas bringing in the rich maturity of experience. 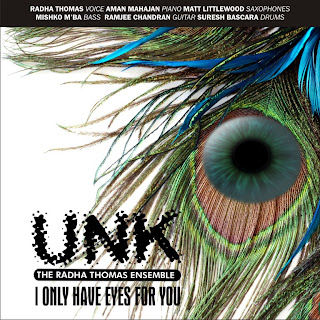 Backed by a bunch of gifted musicians Max Littlewood on the sax, Mishko M’ba on bass, Ramjee Chandran on the guitar and Suresh Bascara on the drums, ‘I only have eyes…’ makes for pleasantly
soothing listening.
The flavour is a fusion of jazz, Latin, bebop, hip-hop and Indian; with Radha’s voice soaring and dropping with mellifluous smoothness. The songs include originals by Radha Thomas,Aman Mahajan, Suresh Shottam; Radha has written new lyrics to melodies like Brazilian Luiz Antonio’s Menina Moca and has reinterpreted standards like Herbie Hancock & Jon Hendricks ‘Watermelon Man’. There’s a charming video of Thomas
and Mahajan performing Watermelon Man on youtube; it moves from funky to dreamy nostalgia and leaves you humming for quite a while.

UNK  performed on Friday, September 22 in Goa at The Sol.
A must-see show

Share :
In God’s own country
A tribute to a time that was