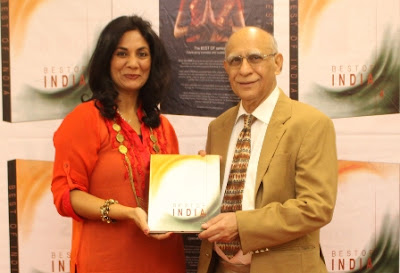 Mr. Ashok Soota, Executive Chairman, Happiest Minds, released the BEST OF INDIA, part of the international BEST OF series of books, here today. He said, “The Best of India book is like a breath of fresh air. In an age of cynicism where we are bombarded with so much negativity, it is a pleasant change to have a publication which focuses on ‘positives’ and success stories.” Congratulating the Publisher & Editor –in-chief Sandhya Mendonca, Mr. Soota said, “The Best of India reinforces the India story and itself will lead to further success for the country as others pick up the message.”

Mr. Soota, who is a former President of Confederation of Indian Industry (CII) and former President of Manufacturers’ Association of Information Technology, has also written the foreword for the book. Speakers at the event included experts who have written articles in the book: SG Vasudev on Indian art, Prathibha Prahlad on dance and Prasad Bidapa about the evolution of India’s fashion consciousness.

BEST OF INDIA showcases 62 key businesses across various verticals that drive its trade and commerce. With an aesthetic blend of beautiful photographs and cogent text, it is a microcosm of Indian success stories. This elegant copper embossed coffee table book highlights the economic and cultural dynamism of India.

Sandhya Mendonca, CEO and Editor-in-Chief of GVP India & Raintree Media, said, “The BEST OF INDIA is a comprehensive and compelling study of the great Indian success story. It examines the various qualities that contribute to the success of homegrown Indian companies – visionary leadership, focus on innovation, knowledge driven systems, agility, value for people, customers and partners’ customers. The book celebrates the success of sustainable companies and business models and looks to offer inspiration through the individual philosophies that power their growth.”

The book is published by Bangalore-based Global Village Publications India (GVP India) and Raintree Media, in partnership with the World Trade Centre Mumbai and the All India Association of Industries, key players in the Indian economy who promote multilateral trade and industry exchanges. It is edited by Sandhya Mendonca with principal photography by Asha Thadani.

The fourth in the India series of ‘Best of…’ books, the BEST OF INDIA vol 1 had an international launch, along with the BEST OF SOUTH AFRICA vol 7. The book was released byHis Excellency, the High Commissioner of India to South Africa Virendra Gupta at the Future of Trade Africa 2012 inJohannesburg on July 16.
Facebook bookstore:

Aditya Mendonca, Director, Digital division, Raintree Media said, “Facebook users can order titles published by Raintree Media & GVPI from the facebook pagehttps://www.facebook.com/raintreemedia. F-commerce is a way by which facebook users can shop for merchandise from their favourite pages without leaving the network at any point during their transaction.”Ashish Agarwal, CEO and founder of Exprestore, said, “Facebook commerce is all set to change to way Indians shop online, compared to e-commerce.”

BEST OF INDIA
Branding a Nation and its people
Pages: 232
ISBN: 978-81-90776127
MRP: Rs. 3000/-
Published by: Global Village Publications India
Cover: Hard bound
Edited by Sandhya Mendonca
The book is available in leading bookstores and online on flipkart.com and on facebook: https://www.facebook.com/raintreemedia.

Share :
Best of India Launch Coverage
In God’s own country