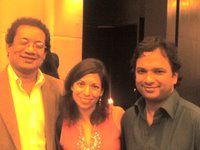 i found his ‘love and longing in bombay’, which good ol’ prof loaned me, v readable. last week, the author and his wife, melanie (on the left, allen in his brown jacket is in the pix with them) were down for the launch that was like a movie release – right down to the press kit: ‘ are you ready for the games to begin’ or something like that, the book cover on a picture post card et al.

not surprising, given his filmi lineage. his sister tanuja chandra is an offbeat film-maker and he himself has co-written the script for ‘mission kashmir’

anita nair was sitting next to me and just before the launch, she introduced me to vikram and i told him i appreciated the razzle-dazzle for a book launch. unless writers crow about themselves, no one will buy their books.

chandra is of modest height and looked a little shy at all the hype. he didn’t read v well and i found it hard to concentrate on the story. but i found them both to be very likeable and charming.

i started reading the book on monday night and i’ve been finding it hard to put it down. when i do sleep, my dreams are full of police chases! ‘sacred games’ says nothing new but says it exceedingly well.

chandra has spent nine years writing this book and am sure nine years in which he has done a lot of growing up himself. how else would he have obtained the sensitivity he reveals ?

as for the story itself, at times i feel it is one of the bollywood films, perhaps ‘satya’, made in to a book; all that mumbaiyya dialogue and tapori stuff. am sure, chandra will make a lot more money than the huge advance he’s received from his publishers when one of the new breed of film makers grabs sacred games and gives it celluloid shape. – sandhya mendonca